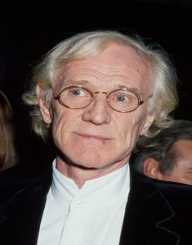 Richard Harris completed his schooling at the Crescent College. In his school days, he was an exceptionally talented Rugby player and was an integral team member in many school-level matches including the Munster Junior and Senior Cups. His dream of becoming a Rugby player was shattered when he got diagnosed with tuberculosis. He battled the disease for two long years. During this period, he read voraciously and developed an interest towards art.

Harris’ ambitions changed, and he wanted to become a director. With this aim in mind, he moved to Britain after recovering from TB completely. Unable to find any appropriate directorial courses, Harris took up acting. In 1956, he got enrolled into the London Academy of Music and Dramatic Art (LAMDA) after being rejected by the Royal Academy of Dramatic Art (RADA) and the Central School of Speech and Drama.

While still studying at the Academy, Richard Harris directed a play ‘Winter Journey.’ The play was critically acclaimed but failed to generate revenue thereby leaving Harris penniless and homeless. After graduating from the Academy, he joined Joan Littlewood’s Theatre Workshop.

Soon after that, he made his stage debut in 1956 with The West End Theater Productions play ‘The Quare Fellow.’ For nearly a decade after his stage debut, Richard Harris kept doing stage shows but failed to make an entry into the film world.

Richard Harris’ film debut came in the year 1958 with ‘Alive and Kicking.’ Subsequently, he started getting roles in major motion pictures, and next in line came two World War II action-adventure films ‘The Guns of Navarone’ (1961) and ‘Mutiny on the Bounty’ (1962). These films helped Richard Harris gain a strong foothold in the industry.

His breakthrough film ‘The Sporting Life’ came in the following year. His portrayal of Frank Machin, a coal miner who turns into an acclaimed Rugby player, earned him many accolades and an Academy Award nomination. He also bagged the Best Actor Award at the Cannes film festival.

In 1967, Harris donned the hat of King Arthur for a musical ‘Camelot.’ Though the film failed to create a buzz, Harris bought the performance rights for the show and successfully toured with ‘Camelot’ several times in his career. He also received rave reviews for his 1970 western drama ‘A Man Called Horse.’

In 1971, Richard was cast in the BBC TV film adaptation ‘The Snow Goose.’ The film became a commercial hit and bagged the Golden Globe award in the category ‘Best Movie made for Television.’ The film was also nominated for BAFTA and Emmy awards.

He mostly took up roles in mediocre films that turned out to be flops. His most prominent flop was ‘Orca’ in the year 1977. In the late 1970s, Harris’ film career plunged into darkness with a slew of flops. His appearances in films became a rare sight though he continued doing stage shows.

Harris bounced back in 1990 with Jim Sheridan’s film ‘The Field.’ He essayed the role of a farmer fighting for the possession of his family’s land, and the role bagged him his second Academy Award Nomination for Best Actor. He delivered yet another critically acclaimed performance in the film ‘Unforgiven’ (1992).

In the last phase of his life, Richard Harris portrayed the role of Roman leader ‘Marcus Aurelius’ in Ridley Scott’s award-winning film ‘Gladiator’ (2000). His other notable films include ‘The Count Of Monte Cristo (2002)’ and ‘Kaena: The Prophecy’ (2003).

Richard Harris became popular amongst children when he played the supporting role of Professor Albus Dumbledore in the first two parts of the Harry Potter series. Harris was critically ill and was not willing to take up the role of Dumbledore as he felt that the character would overshadow all his previous works. But on the insistence of his 11-year-old granddaughter, he accepted the role.

Apart from being an actor, director, and producer, Richard Harris is also a singer and songwriter. He recorded several music albums like ‘The Yard Went On Forever (1968)’, ‘The Richard Harris-Love Album (1972)’, ‘Jonathan Livingston Seagull (1973)’, ‘Mack The Knife (1989). The track ‘MacArthur Park’ from the album ‘A Tramp Shining’ was a chartbuster.

In 1973, Harris revealed the poet in him by publishing his poetry book ‘I, In the Membership of My Days.’ The book was later released in an audio LP format and contained songs like ‘I Don’t Know’ which Harris had self-written.

Richard Harris was infamous as a party animal. His addiction to alcohol and drugs was well-known. He got rid of the habit of drugs after almost killing himself in 1978 due to a cocaine overdose. In 1981, Harris turned a teetotaler.

In 1957, Richard Harris entered into wedlock with Elizabeth Rees-Williams. They are parents of Jared Harris, Jamie Harris, and Damian Harris. The couple divorced in 1969 and 1974, Richard Harris took the marital vows for the second time with American actress Ann Turkel. But his second marriage also ended in divorce.

In 1985, Richard Harris was knighted by the Queen of Denmark.

In 2002, Richard Harris was diagnosed with Hodgkin’s disease. He was subsequently hospitalized due to pneumonia and was in a coma for three days before his death. The 75-year-old died at the University College Hospital in Fitzrovia, London on 25th October 2002. He was cremated, and his ashes were scattered in the Bahamas.