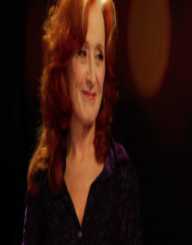 Bonnie Raitt is an American musician and blues singer-songwriter. Her acclaimed success began after releasing roots-influenced albums chalked with rock, folk, blues and country mood. Not to mention her epic slide guitar mastery has drastically earned her several honors and awards. Her sense of the blues became evident in 1971 on her first debut album. Even though she explored different genres in her music, blues has remained evident throughout in her career. Bonnie still reigns as one of the most incredible artists of the 20th century.

On November 8, 1949, Bonnie Lynn Raitt was born in Burbank, California, United States. Her father John Raitt was a musical theater artist and American actor. Bonnie’s mother Marjorie Haydock was a pianist. At eight years old Raitt learned her guitar skills and was enthralled with traditional blues. Her talent wasn’t visible till she joined Radcliffe College in Cambridge, Massachusetts. Before her fame, Raitt met with John Hammond where she created a music relation with him. In the process, she got a chance to acquire the Dick Waterman service. Waterman was known for his acclaimed blues records. That is where Bonnie was guided and mentored on the way forward.

Through Waterman’s service, Bonnie appeared in numerous performances with famous artists including Son House and Mississippi Fred McDowell. Raitt stretched her knowledge by twisting various lexicons in her songs. In 1972 the team released a genre record song titled as Give It Up. The album had other songs such as ‘Under the Falling Sky’ and ‘Love Has No Pride.' In 1973 she released her third album named as ‘Taking My Time’ that also featured Bill Payne and Lowell George. Other songs in the album included ‘You’ve Been in Love Too Long’ and a traditional one known as ‘Kokomo Blues.'

In the mid of her years, Bonnie Raitt released numerous albums though she later joined an entertainment industry that disappointed her. She then joined the Paul Rothschild entertainment industry to reassert her fame. Even then, she quitted halfway and opted to tour more than embracing her mainstream career. In 1977 Bonnie maneuvered into fame with the sixth album titled Sweet Forgiveness by Warner Bros Records. The album reflected a genre of rock music, but it failed to capitalize on the top list of 70s songs. In 1979 she released The Glow album, and ‘Your Good Thing’ song that brought positive remark for the Californian-native lady.

In 1989 her incorrect records proved a success when Bonnie launched the Nick Of Time and was acclaimed as one of the bestselling released. She was amazed when she received a Grammy Award for the first time. The album had a lure tonality that smoothed some of her rocky and rough trademarks. She was also praised for her contribution to The Healer song. At the same pace, the song brought nothing more than cheerful moments. She was honored to appear at the Nelson Mandela concert in Webley Stadium.

Her sweet spirit geared up till she released her new set titled as Luck of the Draw in 1991. The album garnered her three recognitions in Grammy awards hence demonstrating her new skill in singing slow-tonal songs. It was none better than the high-spirited ‘I Can’t Make You Love Me’ on the same album. From 1992 to 2005 Raitt continues to launch her tonal songs such as Silver Lining, Souls Alike, and Fundamental.

Bonnie’s own life came to stabilize just like her 90s songs. Bonnie Raitt was married in 1991 to an Irish actor and poet, Michael O’Keefe. The couple got married in a traditional Indo-European ceremony that honored his Irish and her Scottish heritage. At that time Michael was 35, and Bonnie Raitt was 41. However, the marriage didn’t last for long. They parted ways in 1999. In 1992 Bonnie and her father performed a song with the Boston Pops Orchestra. The also carried out on David Letterman’s television talk show before her father’s demise in 2005. Not only is she into her vocal codes but she is also active in both political and social causes. If she isn’t recording or performing, Raitt loves to support the homeless.