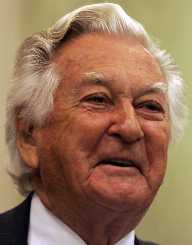 Bob Hawke is an American politician born towards the end of 1929. He was the 23rd prime minister in Australia. Bob Hawke won the elections as a leader of Labor Party in 1983 and served in the position till 1991. He was the prime minister ever to serve the longest as leader of the party. When he resigned in 1991, he handed over the seat of prime minister to Paul Keating. He brought many reforms during his time in power especially social reforms. The other reforms he enacted were health, environmental and economic growth. His great role model in his political career was the 14th prime minister of Australia John Curtin.

Bob Hawke was born Robert James Lee Hawke on December 9, 1929. His place of birth was Bordertown situated in Southern Australia. His father Arthur Hawke was a congregational minister. His mother Edith, on the other hand, was a teacher. The eldest son in the family was Neil. He was seven years older than Hawke. He succumbed to meningitis at the age of 17. The cure to the disease had not been discovered at that time.

Bob Hawke attended the Perth Modern School before joining the University of Western Australia. In 1947 he became a member of Labor Party in Australia. He had just turned 18 at the time. He attained a bachelor’s degree in arts and law by 1952. He later enrolled in the University College at Oxford having received the Rhodes scholarship. His initial studies were economics, philosophy, and politics which were under bachelors of Arts and later took bachelors of letters. He joined Australian National University situated in Canberra for his doctorate studies in 1956.

Bob Hawke cut short his doctorate studies in 1958 to become a member of Australian Council of Trade Unions- ACTU. ACTU was a movement that advocated for favorable working conditions for Australian workers. His first achievement in the Union was in 1959 when he advocated for pay raise for workers which came to be implemented. He was then appointed the president of the Union in 1969. He continued advocating for favorable living and working conditions on employees in Australia.

In 1973 Bob Hawke became Labor party's Federal President. He served in the position till 1978. He won Wills’s Melbourne seat in 1980 which followed his nomination as Industrial Relations, youth and employment’s Shadow Minister. Bill Hayden the then Labor leader appointed him for the post. In 1983 Hayden quit his position as party leader, and Bob Hawke assumed the role. The same year he won the elections for the leader of the party and officially led the Australian Labor Party. This marked the end of the Liberal Party’s 7-years rule.

Bob Hawke was sworn as Australia’s prime minister on March 11, 1983. He then became the 23rd prime minister of Australia succeeding John Malcolm Fraser. During his time in office, he streamlined labor wages in Australia. He brought many reforms which enabled him another chance as prime minister in 1984. In 1989 he established the Asia-Pacific Economic Cooperation. This was a forum which paved the way for free trade between the nations in the region.

His party emerged victorious in the 1987 and also the 1990 elections. This was a great achievement for Hawk as the leader of the party. Bob Hawke appointed Paul Keating as his deputy who later became prime minister in 1991 when Hawk resigned. He then ventured into business and became less involved in politics.

Bob Hawke tied the knot with Hazel Masterson in 1956 and stayed married till 1995. Together they had four children: Susan, Stephen, Roslyn and Robert Jr. Robert Jr. died in infancy.