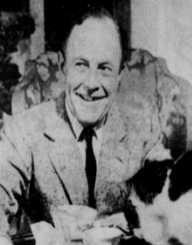 Beverley Cross was born 13th April 1931. He was born in London, England, and his family was a theatrical one, so he was enveloped in the artistic world from birth.

He studied at the Nautical College Pangbourne.

Beverley Cross began his writing career in the 1950’s; writing plays for children. His first play, One More River, was an overnight success. The play debuted in 1958, at the New Shakespeare Theatre in Liverpool, and starred Robert Shaw. The production then went on in 1959, to play at the Duke of York Theatre, in London. Robert Shaw was still the star performer.

His second play, Strip the Willow, didn’t make it to the London theatre. It played around the country, however, and his future wife, Maggie Smith, was the star of the production.

Beverley Cross next tackled the translation of Boeing Boeing, and in 1962, the production had a long run in the West End. He also had great success with Half a Sixpence. The production opened in 1963 and ran in London for over a year.

He was married to Elizabeth Clunies Ross in 1955 and Gayden Collins in 1965. Both these marriages ended in divorce.

He married Maggie Smith in 1975 and was still with her in 1998 at the time of his death. Maggie Smith was a talented actress in her own right when Cross met her.