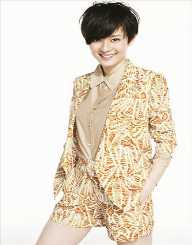 Chinese actress Sun Li was born on the 26 September 1982 in Shanghai, China.

Sun Li had a breakthrough in Singapore when she was a participant in the 2011 series of the Channel 8 TV talent show Star Search. Although she did not win the competition, the exposure led to acting roles in television dramas and film.

As well as historical dramas, Sun Li has done comedy. In 2010 she was in Another Pandora’s Box, and in 2015 her husband directed her in Devil and Angel.

Her role in the television drama The Back Palace: Legend of Zhen Huan was a seventy-six episode drama based on the novel of the same name by Liu Lianzi won Sun an international Emmy Award nomination. The series was about the Emperor’s concubines in the Imperial Palace during the Qing Dynasty between 1644 and 1911.

Sun Li was nominated for an International Emmy Best Actress Award for her role as Zhen Huan. She has won numerous other nominations and awards.

Sun Li is an honorary ambassador for the Shanghai Disney Resort & Theme Park.

Sun Li is a yoga enthusiast. A photograph of her practicing yoga with her small daughter went viral after she had posted it on her Weibo account in 2014.