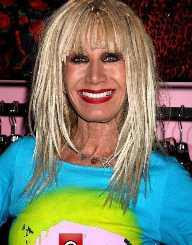 Betsey Johnson is an American stylish fashion designer born on August 10, 1942. She does not follow the crowd but always prefers to introduce original and creative designs. Though some see her works as overrated, she is in the class of her own. Though not a model, she usually does a cartwheel at the end of fashion shows which has become her trademark.

Betsey Johnson was born on August 10, 1942, in Wethersfield, Connecticut as the second child of Lena and John Johnson. She spent most of her early days in Terryville Connecticut. There she enrolled in some dance classes which would later serve as a source of inspiration for her latest designs. After her high school education, Johnson enrolled at the Pratt Institute and continued at the Syracuse University where she graduated Phi Beta Kappa. In school, she was part of the Alpha Xi Delta women sorority. She then did her internship at the Mademoiselle magazine.

While doing her internship with Mademoiselle Magazine Betsey Johnson won the Mademoiselle Guest Editor Contest which inspired her to move into fashion. With the newly developed interest, she joined the Manhattan boutique a year later where she became the in-house designer for the boutiques Paraphernalia. With her involvement in fashion, she became an integral part of the youthquake fashion movement and Andy Warhol underground scene.

Betsey Johnson came up with her boutique, Betsey Bunky Nini in New York. She worked with Edie Sedgwick as her in-house model while she came out with the designs. Johnson also took over the operation of fashion label Alley Cat in 1970 and made huge sales of $5 million in her debut collection for Alley Cat. Two years later, she won the Coty Awards for her designs. With her success in the fashion industry, she then decided to come up with her clothing line in 1978.

After an unsuccessful sell in her second collections which led her to losses and about 3,000 pieces of spring clothing unsold, Betsey Johnson opened a retail store in Soho, New York City. That was to aid her in selling her works. Currently, she has about 65 stores worldwide and has since 2004 included hats, handbags, accessories and scarves into her line. Johnson has worked with several celebrities and designed the dress Lisa Loeb wore in her Stay, I Missed You music video in 1994.

Betsey Johnson and her daughter Lulu has a TV reality show which has been aired on Style Network since May 2013. Cyndi Lauper performed at her 40 years retrospective fashion show for her brand on September 12, 2012. She competed in the I9th season of Dancing with the Stars after announcing on September 4, 2014. She was eliminated in the fourth week.

Betsey Johnson married John Cale in 1968, but the marriage lasted for just a year. The couple had a daughter Lulu Johnson. Betsey Johnson is a long-term cancer survivor. On April 26, 2012, filed a voluntary for Chapter 11 bankruptcy protection.

Betsey Johnson was inducted into the Fashion Walk of Fame in 2002. She was honoured with a Medal of Honour for Lifetime Achievement in Fashion by The National Art Club in 2009.