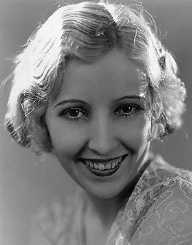 American actress Bessie Love was born on the 10 September 1898 in Midland Texas.

After high school graduation, her parents paid for her to travel around the United States for awhile. When Bessie Love returned home to Los Angeles she was introduced to D.W.Griffith at Biograph Studios. She started her acting career with small roles in The Birth of a Nation (1915) and Intolerance (1916). After that she appeared in The Aryan (1916), The Mystery of the Leaping Fish (1916), St Elmo (1923), Those Who Dance (1924) and The King of Main Street (1925). Bessie Love helped popularise the dance, the Charleston after her performance in The King of Main Street. The dance became wildly popular in the Western world and was named after the city of Charleston in South Carolina. The song, The Charleston, was composed by James P Johnson and was first heard in the Broadway show Runnin’Wild in 1923. Bessie Love also appeared in The Lost World (1925), The Song and Dance Man (1926) where she again did the Charleston in a scene; Dress Parade (1927) and The Matinee Idol (1928).

After the silent film area, Bessie Love made a successful transition into sound and won an Academy Award nomination for the MGM Musical The Broadway Melody (1929).

She went to live in the UK in 1935 and where she worked in theatre. Living in England, she occasionally returned to the United States to work, but her Hollywood heydey was over by then.

Bessie Love won an Academy Award Best Actress nomination for The Broadway Melody (1929), and she has a star on the Hollywood Walk of Fame.

In 1929 Bessie Love married film director Bill Hawks, and they divorced in 1936. In the 1970s she became a British citizen. She one child, a daughter Patricia, who was born in 1932.

Her autobiography From Hollywood With Love was published in 1977.

Bessie Love died at Mount Vernon Hospital on the 26 April 1986 at the age of eighty-seven.