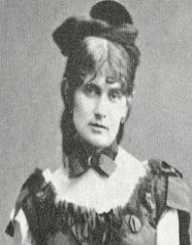 Artist Berthe Morisot was born on the 14 January 1841 in Bourges, France to Edme Tiburce Morisot and Marie Thomas. Her father was a government official, and her mother was related to the painter Jean-Honore Fragonard. Morisot had two sisters, Yves and Edma and a brother Tiburce. The family relocated to Paris in 1852 where Morisot lived for the rest of her life.

As part of her education, Berthe Morisot had art lessons with the painter Joseph Guichard. She also studied with Barbizon School painter Camille Corot. Her sister Edma also studied art, and although she did pursue a career in art, she encouraged her sister to do so.

To further her education, Berthe Morisot registered as a copyist at the Louvre and had the opportunity to meet artists of the day. Apart from painting, she also studied sculpture.

The Parisian Salon accepted two of Morisot’s paintings in 1864, and she continued exhibiting there for a number of years. She was introduced to the French painter Edouard Manet in 1868, they became friends, and he encouraged her painting. Manet often used Morisot as a model including for one of his most famous paintings The Balcony (1868).

By 1872, Berthe Morisot was an established artist. She sold over twenty paintings to art dealer Durant-Ruel. And through Manet, became part of his circle of friends, some of whom would become known as the Impressionists. Manet, was not an Impressionist and discouraged Morisot from adopting the style. She disregarded his advice, and in 1874, her work was displayed at the first exhibition of Impressionist paintings. Other painters who exhibited were Paul Cezanne, Claude Monet, Camille Pissarro. Edgar Degas, Alfred Sisley, and Pierre-Auguste Renoir.

Berthe Morisot continued as a member of the Impressionist circle and exhibited with artists such as Monet, Renoir, and Degas. In 1886, she organised what was to be the final Impressionist exhibition. Afterwards, she continued to exhibit with other modern artists including the Belgian group Les XX’s show in 1887 and at La Libre Esthetique in 1894. After her death in 1895, Degas, Renoir, Monet, and Mallarme paid tribute to her by putting on the first retrospective of her work, a collection of 380 of her paintings.

Berthe Morisot married Eugene Manet, brother of Edouard Manet, in 1874. Edgar Degas gave the couple a portrait of Eugene as a wedding present. They had one child, a daughter Julie (b.1878).  Morisot used her daughter as a model, and she was also painted by Renoir and Manet. Her husband died in 1891. Morisot died on pneumonia on the 2 March 1895.