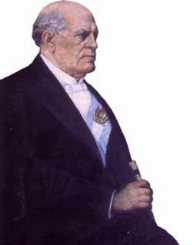 Bernardino de la Trinidad Gonzalez Rivadavia y Rivadavia was born on May 20, 1780, in Buenos Aires. His father Bernito Bernardino Gonzalez de Rivadavia was Spanish lawyer. He was the fourth son of his parents.

Bernardino Rivadavia began taking part in political activities in the Argentine resistance to the British invasion in 1806. He also participated in the May revolution for Argentine Independence in 1810. The following year, he became the Secretary of the Treasury and Secretary of War, making him the dominant member of the triumvirate. This government served until 1812 and focused on organizing an arm as well as normalizing the relations with Spain.

In 1814, King Ferdinand VII of Spain returned to his throne and began the Absolutist Restoration, which had severe consequences on the South American provinces. Rivadavia and Manuel Belgrano traveled to Europe to seek support for the United Provinces from Spain and Britain. The diplomatic mission ended up being a failure, since Francisco de Paula, who they wanted to become the regent of the United Provinces, refused to work against the interests of the King.

During his time in Britain, Bernardino Rivadavia was a witness to the Industrial Revolution in the country, as well as the rise of Romanticism. He was inspired by the British culture and wanted to see a similar development in his home country. He invited people to move to the city. In 1821, Rivadavia became the minister of government to Buenos Aires.

Over the course of the next five years in this position, Bernardino Rivadavia worked to improve the city’s infrastructure, art, and education. He was a significant influence, and often his improvements were at the expense of the greater Argentina. Nevertheless, Rivadavia constructed avenues, paved and lighted streets, schools and the University of Buenos Aires. He also initiated the building of the Theatre, Geology and Medicine Academies and the first Museum of natural science in South America.

Bernardino Rivadavia was a strong supporter of the centralized government. He often faced very violent opposition from the supporters of federalism. Despite the opposition, he was elected the first President of Argentina in 1826.

During his presidency, Rivadavia focused on the cultural and educational development of the country. He founded several museums and greatly expanded the national library. During his term, the nation was at war with Brazil over the territory of modern-day Uruguay. Only after a year in his position, Rivadavia was facing rising power from the Federalist Party, and several of the countries provinces were in an open revolt. For these reasons, he resigned from the office on February 27, 1827.

After leaving his presidential post, Bernardino Rivadavia returned to private life, but in 1829, fled to Europe. in 1834, he returned to Argentina to face his political enemies, but was sentenced to exile. Rivadavia died in Spain on September 2, 1845.

In 1809, Bernardino Rivadavia married to Juana del Pino y Vera Mujica, who was the daughter of the viceroy of the Rio de la Plata.