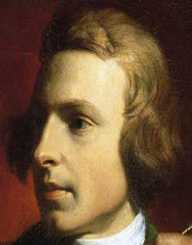 Benjamin West was born on October 10, 1738. He was a history painter. He was the second person to become President of the Royal Academy in London. He died on March 11, 1820, at the age of eighty one.

Benjamin West was born on October 10, 1738, in Springfield in Pennsylvania. He was born to an innkeeper and his wife. Later, his family moved to Newtown Square in Pennsylvania. When he was growing up, Native Americans played a significant role in teaching him how to make paint by mixing clay from the river bank with bear grease in a pot. He did not have an excellent education because even in his adulthood he could not spell simple words.

Benjamin West's career as a painter started while he was still young. From 1746 to 1759, he mostly painted portraits in Pennsylvania. In 1756, he travelled to Lancaster and was encouraged to paint ‘Death of Socrates’ by his patron William Henry. His painting of ‘Death of Socrates’ became popular as was deemed unique from the original one. Dr. William Smith was intrigued by Benjamin’s painting that he decided to become his patron.

William educated Benjamin and gave him connections to wealthy and politically connected persons who lived in Pennsylvania. Benjamin later met painter John Wollaston who taught him his techniques of painting. He then met Benjamin Franklin, and they became good friends. He later painted a portrait of Benjamin.

In 1760, Benjamin West travelled to Italy with painter Scott William Patoun where he conducted a grand tour. He copied the works of Italian painters such as Raphael and Titian. In 1763, he travelled to England where he was introduced to Richard Wilson. In England, he painted ‘Angelica and Medora’ and the portrait of General Monckton. In 1766, he painted an altarpiece for St. Stephen Walbrook. He later painted ‘The Continence of Scipio’ and ‘Orestes and Pylades’ which became famous.

In England, he was referred to as the ‘American Raphael.’ In 1772, he became a historical painter to the King’s Court. At the court, he painted a lot of portraits including nine portraits of the members of the royal family. In 1791, he became the Surveyor of the King’s Pictures; he held the position until his death. Other paintings he painted include ‘The Death of General Wolfe,’ ‘The Battle of the Boyne’ and ‘The Death of Nelson’ among others.

In 1792, Benjamin West was appointed the President of the Royal Academy. In 1805, he resigned from the post and was replaced by James Wyatt. In 1806, he was elected President again, a position he held until his death. Pupils who studied under him included Gilbert Stuart, Thomas Sully, Abraham Delanoy, John Green, Charles Wilson Peale, Samuel Morse, and Ralph Eleaser Whiteside Earl among others.

In 1765, Benjamin West married Elizabeth Shewell at St. Martin in the Fields. They had children together. Benjamin West passed away on March 11, 1820, at his home in Newman Street in London. His remains were buried in St. Paul’s Cathedral.