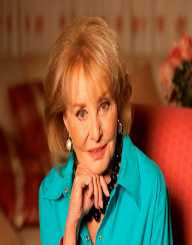 Barbara Walters is an American television host; she is best known for her work on 20/20 and TheToday Show.

Barbara Walters was born in Boston, Massachusetts on 25 September 1929. Her family was descended on both the patrilineal and matrilineal lines from Jewish refugees from Russia. Her parents were Louis Walters and Dena née Seletsky. Her father was involved in show business and worked at various times as a booking agent, a producer and as a nightclub owner. The family moved to the East Coast of the United States of America while Walters was young, this was due to the ebb and flow of her father’s business.

Barbara Walters had two siblings, a sister Jacqueline, who was mentally disabled, and a brother Burton who died young of pneumonia. When Walters was ten, she moved with her family to Miami due to her father losing his business interests and the family home in Boston. The family then moved between Miami and New York as Louis Walters attempted to rebuild his business.

Walters changed schools numerous times due to her family’s relocations but graduated from Birch Wathen School in New York. She went on to study English at Sarah Lawrence College, located in Yonkers, New York. Walters graduated from college in 1951. Walters looked for work in the media following her graduation.

Barbara Walters began her career working with an advertisement company. She also got work with a New York TV station and worked as a producer for a couple of short shows. In 1955, she began working at the CBS network as a writer for The Morning Show. She also worked with the publicist John ‘Tex’ McCrary. Her first appearance on television came on NBC’s The Today Show, where she had worked as a writer and a researcher.

Walters was given puff pieces and the weather to report on, she would later claim this was due to no station wanting to give a woman a serious reporting assignment. In particular, Frank McGee, one of the hosts of the show, refused to work with Walters unless he took the lead in all interviews. It took until 1974 for Walters to finally receive the title of co-host. Walters also suffered a poor working relationship with her co-anchor on the ABC Evening News, Harry Reasoner.

Barbara Walters would host the Evening News for ABC between 1976 and 1978. Walters was also selected by ABC to be the moderator of the televised debate between then-President Gerald Ford and Jimmy Carter during the Presidential election of that year. Another significant piece by Walters saw her jointly interview the President of Egypt and Israel, Anwar Al Sadat and Menachem Begin, in 1977.

In 1979, Walters joined the show 20/20. 20/20 was a newsmagazine show that tackled a range of topics. She joined Hugh Downs on the show, with whom she had worked with on The Today Show. During her time as a journalist, Walters has interviewed some notable names such as Michael Jackson, Fidel Castro, Margaret Thatcher and Hugo Chavez.

In 1997, Barbara Walters began working on The View, a daytime talk show hosted by a panel of five female co-hosts. Walters created the show and is one of the hosts of the show. The show has so far run for twenty seasons, and Walters continues as one of the shows executive producers.

Barbara Walters married for the first time in 1955. She married Robert Katz, but the marriage was annulled after just eleven months. Her second marriage was to Lee Guber, a theatre owner, and producer. Their marriage ended after thirteen years, and they have one adopted daughter together, Jacqueline. Walters married Merv Adelson in 1981. They divorced in 1984 only to remarry in 1986 and finally divorce for good in 1991.

Walters has also had relationships with some notable individuals. Walters dated Roy Cohn, who worked as part of Joe McCarthy’s communist witch hunts and he also worked as a legal advisor to Donald Trump. Walters also had an affair with Senator Edward Brooke during the 1970s. Walters is on record saying that her greatest regret is that she did not have more children.