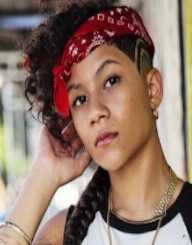 Also Known For : Artist, You Tube

Baby Kaely was born on February 22, 2005, in Newark, New Jersey, United States of America. She is an American rapper and YouTube star. She is only twelve years old. She was brought up alongside three siblings, Justice, Jordan and Jaden. She started her career when she was only five years old. At the age of five, she had wholly developed her skill to sing and memorize songs. She is a special kid because of the talent that she has too much at her tender age. Her parents are very supportive of her career, and they help her in pursuing it.

Baby Kaely has been featured in the song ‘Ghetto Ghetto’ by Will I Am. She is a good rapper as she loves to jog around with words. Her popularity grew very fast because at the age of three she was already to sing audibly and precisely. She became famous to the general public, and she also became the voice of Young kids.

Baby Kaely started singing when she was three years old, but her career began at the age of five. Unlike other kids, she memorized songs and sang them wholly at the age of three a thing that many kids cannot do at that point. Kaely was just born a star as she would memorize songs after listening to them on the radio or television. She reached the star status within two years because she was just exemplary in what she did. She can sing all songs and also rap precisely. She has attracted a lot of followers on her YouTube that she created in 2010.

Baby Kaely has made a name for herself as a hip-hop artist, and she is not stopping until she achieves greatness. She posts original material on her YouTube channel. A lot of people views the videos she posts online and people are also amazed at how comfortable she sings and portrays her talent for the whole world to see. She is a famous YouTube personality because of her uploads and her music. Her popularity worldwide as a hip-hop artist made her known as the national voice of young kids because if it is voice, she already has and in abundance.

Baby Kaely has starred in the song ‘Ghetto Ghetto’ by Will I Am. Her appearance in the song shot her popularity to the roof as she was now made known to a lot of people and her fan base has largely increased. She has achieved a lot at the age of twelve and more is still coming her way because she is not giving up on what she loves doing.

Baby Kaely is charming and cute. She is hardworking and determined to make her career go places. She is still very young, but she has fantastic skills in music. She writes her songs and then posts videos of her singing her original songs on her YouTube Channel. She is committed to everything that she does, and she is also intelligent. She is unique because at a very young age she could memorize and sing songs that she heard on the radio almost immediately she heard them.

Some adults cannot even memorize songs within a short period. Baby Kaely has a lovely voice, and she loves rapping. She has become a famous hip-hop artist in the United States of America at the age of twelve. She has a very supportive family that provides whatever she needs to advance her career. She has not been involved in any controversies. She is still young to have drama following her around.

Baby Kaely was born in Newark, New Jersey. Her family later moved from Newark to Florida. She showed an interest in music from a very tender age and having that she has supportive parents, they nurtured her talent into the career that she has now. At first her parents were inquisitive about her ability, but later on, they realized that they have a special child. She is known nationwide as the voice of kids.