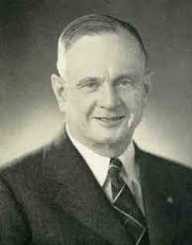 Arthur Davidson, one of the four co-founders of Harley-Davidson, was born on the 11 February 1881 in Milwaukee, Wisconsin. He was the son of William C. Davidson and Margaret Adams McFarlane. He had two older brothers, William and Walter.

After completing his schooling, Arthur Davidson trained as a pattern-maker. Davidson and his friend William S.Harley, who was a draftsman, were keen to design and build a motorised machine. Motorised bicycles had been designed and built but were not yet freely available at a reasonable cost to the general public.

In 1901, they drew up plans and began building their first prototype. Working in their friend Henry Melk’s machine shop in Milwaukee, the motorcycle was completed in 1903 with assistance from Walter Davidson. After testing and finding the machine unable to climb without peddling, they went back to the drawing board.

Learning from their first design, they designed a new machine, with a bigger engine and a loop-frame design. The new prototype using the loop-frame design was built in a shed in Davidson’s backyard with the assistance of Arthur’s brother, William A. Davidson. The machine appeared at a motorcycle race held at State Fair Park in Milwaukee on the 8 September 1904, ridden by Edward Hildebrand. This event is the first record of a Harley-Davidson competing, Hildebrand finished 4th.

Arthur Davidson dealt with Harley-Davidson dealers and had a reputation for offering good advice. He understood advertising and used the media to promote Harley-Davidson motorcycles as well as to encourage the sport of motorcycling. He was also responsible for starting a Harley-Davidson service school to train mechanics. He worked closely with the American Motorcyclist Association and was also involved in setting up the Kilbourne Finance Corporation, serving as the company’s president.

Apart from motorcycling, Arthur Davidson was a farmer who bred prize Guernsey cattle. Davidson was also active in the Boy Scout movement.

Arthur Davidson was a generous philanthropist and among other initiatives, established a trust fund and land for a camp to the Boy Scouts movement in his home state. He also established a home for the blind in Wisconsin.

Arthur Davidson was married to Clare Beisel. The couple had three children: Margaret, Arthur Jr., and James. Davidson died on the 30 December 1950 in a motor vehicle accident close to Waukesha, Wisconsin. His wife Clara was also killed in the crash. His son James and his wife were killed in a motor accident in 1966.