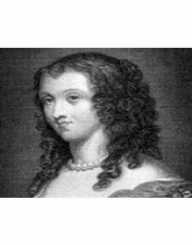 Aphra Behn was a British author, poet, and playwright of the English Restoration Era. She was the first English woman to earn her living through writing. She became a literary role model for later women writers, poets, and authors. Aphra Behn has written about nineteen plays, four novels and several short stories and poems. She has also translated several works from French and Latin.

Aphra Behn was born in Kent, England on July 10, 1640. Her star sign was Cancer. The details of her early life are however not known. It is believed that her parents were John Armis a barber and his wife, Amy. However, there are other sources which belief her parents to be a couple named Cooper or John Johnson of Canterbury. It is clear though that she had no aristocratic status. One certain fact is that in 1663, the young Aphra accompanied Mrs. and Mr. Johnson to West Indies.  During the journey, Johnson passed away, and his family settled in Surinam.

Aphra Behn returned to England in 1664 and married Johan Behn, a Dutch merchant. The death of her husband left her with no money. She used her wit and talent to support herself. Aphra Behn served as a political spy for King Charles II during the Anglo-Dutch war. Her job was to establish intimacy with William Scot, son of regicide Thomas Scot. Aphra Behn moved to Antwerp and used the code name Astrea. She used this as her pseudonym when she published her later works. Aphra Behn was not able to bring in useful information. Her expenses also increased, and the king was not regular in his payments and sometimes did not pay. She borrowed heavily and returned to England.

Despite petitions when King Charles II did not pay her she was sent to debtor’s prison. She was released soon for unknown reasons.

Aphra Behn then started working as a scribe for the king’s company and the Duke’s company. The theatres which were closed under Cromwell were now opened under Charles II. Behn, who had been writing poems now wrote her first play. ‘The Forc’d Marriage’ which was staged in 1670. It was followed by ‘The Amorous Prince’in 1671. Both the plays were well received. The third play ‘The Dutch Lover’was not as well received. Behn went away from the public for three years. In 1676 she came up with her sole tragedy play ‘Ableazar.’ She then turned to comic works and was commercially successful. Her popular works were ‘The Rover’ and ‘Love Letters Between a Nobleman and His Sister’ (1684-77). She then wrote the play ‘The Emperor of the Moon’ which served as a forerunner to modern day pantomime.

In 1688 she released her novel ‘Oroonoko.’ This is considered as one of her best novels. It is the story of an enslaved African prince. She claims to have met him in South America. It dealt with slavery, race, and gender. Her work ‘, A Discovery of New World,’ is a translation from a French work written by Bernard le Bovier de Fontanelle. Aphra Behn also wrote several poems which were collected and published as ‘Poems upon several Occasion with a Voyage to the Island of Love’(1684) and‘Lycidus’ or ‘The Lover in Fashion’ (1688).

Aphra Behn was the most prolific female writer, and her personality was considered next to Poet Laureate John Dryden. Virginia Wolfe referred to her in ‘A Room of One’s Own.’ Aphra Behn credits Behn as being the one who should be respected by all women as she had earned them the right to speak their minds. Aphra Behn relative freedom as a writer and choosing to write about sexual desire made her the object of scandal. She is known to have stated that the same work would not have caused problems if a man had written them.

Aphra Behn married John Behn, a Dutch merchant on her return to England in 1664. He, however, died the following year. Aphra Behn faced a lot of health issues in the last four years of her life. She, however, continued writing. She completed the translation of Abraham Cowley’s ‘Six Books of Plants’ a few days before her death. Aphra Behn two plays ‘The Widow Ranter’ and ‘The Younger Brother’ was released posthumously.

Aphra Behn died on 16 Apr 1689. She was buried in the East Cloister Westminster Abbey. Her tomb bears the following inscription ‘Here lies proof that Wit can never be Defence enough for Mortality.’