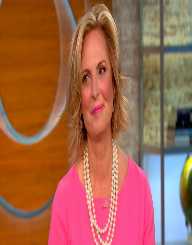 Ann Romney was born on April 16, 1949, in Detroit, Michigan, USA. Her father was Edward Davies, and her mother was Lois Davies.  Ann later changed her last name to Romney when she married Mitt Romney.

As a child, Ann Romney attended the Kingswood School, which was an all-girls private school in Bloomfield Hills, Michigan. Later, while in high school, she began dating Mitt Romney, who she would later go on to marry. She graduated from high school in 1967.

After high school, Ann Romney began attending Brigham Young University. However, after her marriage, she took a break from her education to raise her five children. She would later return to school in 1975. She eventually earned a bachelor’s degree in French from this university.

For most of her life, Ann Romney spent her time as a stay-at-home mother while her husband pursued his political career. However, her life changed when she was diagnosed with multiple sclerosis in 1997. She slowly learned to live with her condition, and she eventually joined the National Multiple Sclerosis Society.

In 2002, Mitt Romney became the governor of Massachusetts. While her husband worked in this position, Ann Romney worked with the various child and teen charities. Many of the charities she worked with were health related. She also worked with organizations that worked to prevent teen pregnancies.

Some of the other charities Romney is involved with include the Ten Point Coalition, which helps children in urban areas; Families First, with is a parent education program; and Olympic Aid, which helps children in areas affected by war experience sports events. She is also a member of United Way and the Massachusetts Advisory Board of Stand for Children.

Around the same time that Ann Romney was recovering from her multiple sclerosis, Romney began to spend much of her time on horseback. At first, she used it as a form of physical therapy, but soon she began to practice the sport for pleasure. After she had enough practice, she began participating in equestrian competitions.

In 2005, she won a Silver Medal at the Grand Prix, and in the next year, she won a Gold Medal. Since then, she has continued to perform in competitions. Ann Romney also owns several horses, which she keeps in Moorpark, California in the Ebling’s stables. Romney and her family also donate money to help others who use the stables to attend the Olympics.

In 2015, Ann Romney released her memoir: In this Together: My Story. In this book, she discusses her medical history and the complications she faced with her multiple sclerosis. She also discusses the role her family played in her recovery and management of her symptoms.

Most of Romney’s awards are due to her charity work. Some of her most impressive awards are listed below.

Ann Romney married Mitt Romney in 1969. This couple has five sons together: Benjamin, Craig, Joshua, Matthew, and Taggart. This couple also has over a dozen grandchildren. In 2008, Mitt Romney ran for president. During his campaign, Ann worked with him and supported him on every step of the way. However, he eventually lost to President Obama. Mitt Romney would later run for president again in 2012, and Ann continued to support him. However, he lost once again to President Obama.

The Ann Romney Center for Neurological Diseases opened at the Brigham and Women’s Hospital (Boston, Massachusetts) in 2014. This medical research building looks for a cure for several medical ailments, including multiple sclerosis, Parkinson’s disease, Alzheimer’s disease, as well as other neurological problems.