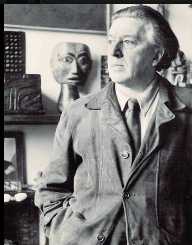 French theoretician and writer André Breton was born on the 19 February 1896 in Normandy, France into a working-class family.

In 1913 André Breton enrolled at the Sorbonne to study psychiatry and medicine. His primary interest was in mental illness and the emerging area of psychotherapy.

His studies were interrupted during WW I when Breton went Nantes to work in neurological wards treating injured soldiers. In the final year of the war, he also spent time working in a psychiatric ward in Saint-Dizier.

Around this time he met Jacque Vache, and they kept up a correspondence until Vache died in 1919. Their letters, Letters of War, were published in 1919. Later in the early 1920s, he met Sigmund Freud and gained knowledge of Freudian concepts. The two men kept up an ongoing correspondence after their first meeting.

Initially André Breton joined a Dadaist group in Paris (1916). Three years later he co-founded a magazine entitled Littérature with Louis Aragon and Philippe Soupault. The magazine which was published between 1919 and 1924 gave the first ideas and examples of automatic surrealist writings. As surrealism developed Breton became dissatisfied with Dadaism, and in 1924, he officially broke away and published the Surrealist Manifesto. In 1927 he became a member of the French Communist party and in 1930, the second Manifesto of Surrealism was published.Breton left the French Communist party in 1935 because he disapproved of their support of Stalin although he remained a Marxist all his life.

André Breton went to Mexico in 1938 to attend a Surrealism conference, and it was there that he met Leon Trotsky as well as Diego Rivera. During WW II, In 1941, Breton’s work was banned by the French government, and he was exiled inNew York City where he wrote the third Surrealist manifesto and, in 1942, curated a Surrealist exhibition at Yale University.After the war had ended, Breton returned to Paris in 1946. Breton published three more books of poetry and continued his advocacy and support of surrealism.