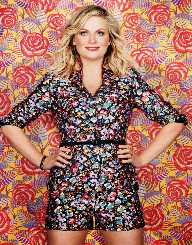 Actress and comedian Amy Poehler was born on the 16 September 1971 in Burlington, Massachusetts to William Poehler and Eileen Milmore. Poehler has a brother Greg who is also an actor and comedian.

Amy Poehler graduated from Burlington High School, Burlington, Massachusetts in 1989. Poehler obtained a B.A. in media and communications at Boston College in 1993. She began doing comedy sketches at college and was a member of the comedy troupe My Mother’s Fleabag. After graduating from college, she studied at Second City as well as at Improv Olympic in Chicago. Studying in Chicago, Amy Poehler met Matt Besser, Ian Roberts and Matt Walsh and they formed the Upright Citizens Brigade.

Amy Poehler performed with the Upright Citizens Brigade around Chicago, and in 1996 they moved to New York City. They began appearing on Late Night with Conan O’Brien and by 1998 had their half-hour sketch on Comedy Central which lasted until 2000.

The group then opened an improv training and performing center in New York City, holding shows and giving classes on improv as well as writing.

Poehler starredNBC’s Parks and Recreation in the role of Leslie Knope, Deputy Director of the Parks Department in Pawnee, Indiana. The show aired until February 2015.

Her brother Greg Poehler’s show Welcome to Sweden, on which she was executive co-producer, premiered in 2014. Amy Poehler made some cameo appearances on the show, but it was canceled in mid-July 2015 NBC due to low ratings.

Amy Poehler has received many nominations and awards for her work. She was the first Saturday Night Live cast member to be nominated for the Primetime Emmy Award for Outstanding Supporting Actress in a Comedy Series in 2008. Amy Poehler has received a star on the Hollywood Walk of Fame and Time magazine included her on their most 100 influential people in the world list in 2011.