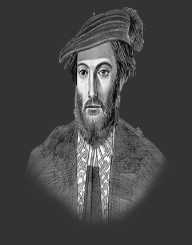 Italian explorer Amerigo Vespucci was born on March 9th, 1454 in Florence. He is famous for being the first explorer to argue out that Brazil and West Indies were not in Eastern Asia. Aside from this, it is his name that the naming of “America” was coined. “America” is a feminine Latin term for his surname Amerigo. From his extensive explorations, he also claimed that the discovered lands were composed of a distinct landmass and that the Europeans were not aware of it.

Amerigo Vespucci was born on March 9th, 1454. He was the third born son of Ser Nastagio and Lisabetta Mini. Sources claim that Vespucci obtained his early education by being homeschooled by his uncle Fra Giorgio Antonio Vespucci. His elder brothers were however sent to the University of Pisa where they could undertake their academic careers.

While Vespucci was still young, he learnt the way of life of a mercantile. As a result, he soon landed himself a job at the house of Medici as a clerk. This business was under the management of Lorenzo de' Medici. Soon, Vespucci earned the trust of Lorenzo and was highly favored by him. In 1492 Lorenzo passed away and Vespucci took charge as the head of the business entity.

Medici also considered Amerigo Vespucci as a trustworthy worker, and in March the same year of Lorenzo’s death, he sent Vespucci to Cadiz, Spain. He was to go and oversee operations in the Medici branch as there were several irregularities in this office in Spain.

Around the same period in the 1490s, Amerigo Vespucci crossed paths with Christopher Columbus who later encouraged him to explore the world. Fortunately, King Ferdinand and his queen, Queen Isabella were more than willing to fund the explorers’ desire to tour the world. This influenced his career course over the period from 1499 to 1500.

Amerigo Vespucci was involved in an expedition and sailed with Alonso de Ojeda, who was the fleet commander. The primary purpose of the voyage was to navigate around the southern sections of the African mainland and enter into the Indian Ocean. The two travelers parted ways after reaching Guyana. Vespucci went further to the south where he discovered the mouth opening up to the Amazon River. He also saw two rivers before completing his voyage, i.e., Orinoco and Trinidad River.

His love for travel had heightened and that he yearned to go for another tour but the Spanish rulers denied him of the opportunity. Fortunately, his desires were met after the Portuguese rulers gave him a chance. In 1501, Vespucci went on his second voyage. His journey kicked off in Lisbon, and his fleet moved to Cape Verde before heading to Brazil’s coast. The fleet went coast along South America and settled for a while at one of the bays found in Rio de Janeiro. On July 1502, Vespucci completed his mission as he arrived in Lisbon.

It is from his second voyage that Amerigo Vespucci made his discovery about the different land masses that he had seen. This prompted him to write a letter to the Medici. From the letter addressed to Medici, Vespucci explained that they were different from what he had expected. He also described that they were not part of Asia. His description of the land masses was that they were a “New World”- this was a continent not known during this time as they only were aware of Asia, Europe, and Africa.

Little information is known about the personal life that Amerigo Vespucci lived. Rumor has it that he had wedded to Maria Cerezo.

Amerigo Vespucci passed away on February 22nd, in 1512. His cause of death was malaria, and he was aged 57 at the time of his death.