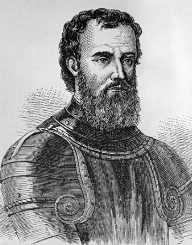 Giovanni da Verrazzano was an Italian merchant, seafarer, and explorer who lived during the late 1400s and early 1500s. He is also credited with being the earliest European to have made an elaborate sketch map of the American east coast after his voyages.

Giovanni da Verrazzano was born in the year 1485. Though this disputable in some circles, many historians concur with the narration. Born in Florence, which is Fiorentina in today’s Italy, he was the son of Piero Andrea di Bernardo and Fiammetta Cappelli da Verrazzano. The young Verrazzano was raised and educated in Florence. Then a bustling capital of the Republic of Florence, the city was the hub of elite education. Verrazzano is believed to have studied mathematics and navigational studies in school.

He is believed to have started his exploration journeys along the Mediterranean Sea. His sails led him to the North African coast and the Middle East. This was generally considered the toughest initiation test for any European seafaring student. After his forays in the Mediterranean Sea, Verrazzano moved to France. It is believed he settled in the town Of Dieppe in around 1507.

During this period, most European powers were making trade and conquest expeditions around the world. The British, Italian, Spanish and Portuguese had made significant voyages to the Middle East, India and China. With stories of immense wealth coming from the trade routes, the King of France decided to join in. He encountered delays since by this time France was technically at war with the Italians. Ironically it was the Italian merchants in France who supported his expeditions.

Verrazzano saw the opportunity. He managed to convince the king and his merchant friends to fund him. They finally agreed. In 1523, Verrazzano left France for a trade route to China via the newfound land. He was to compete with other great explorers like Christopher Columbus, Amerigo Vespucci among others. Initially, four ships set sail. But after a severe storm in the seas, Verrazzano was left with one. He finally set sailed out with the ship named La Dauphine in French or Delphina in Italian.

For the next seven months, Verrazzano explored the east coast of now North America. He reached the present-day North Carolina in March 1524. After being hosted by the friendly Native American tribes, he headed south looking for suitable docking site. After reaching today's Florida, Verrazzano turned north. His expedition led him as far north as Nova Scotia in today’s Canada. With several forays inland, he set sail back to France. Together with his crew, Verrazzano docked in Dieppe on July 8, 1524. Verrazzano gave his expedition report back to the French king. His story narrated of the present-day Hudson River, Maine, Delaware Bay, New York harbor and North Carolina areas and their inhabitants.

Fascinated by his report, the French king commissioned him to another exploration journey. This time Verrazzano set sail in 1527. Unable to find a suitable route northwards, his fleet sailed south of the new continent. He finally reached present-day Brazil after a few months. His mission failed again. His team never circumnavigated the southern continent. Despite the setback, Verrazzano went back to France with the riches from Brazil. His fleet was loaded with a cargo of Brazil wood. The wood was valued for its special dye that was beneficial to the textile industry.

The following year, Verrazzano sailed again to the new land with a fleet of three ships. On board was his younger brother Girolamo. This time he was determined to fulfill his quest to discover his way to the Far East. Using his familiar route, he docked in Florida. After some few days, he journeyed south through the Bahamas, the Caribbean and docked in the Little Antilles. Verrazzano went ashore using a boat to explore the Guadeloupe Island. He met a hostile party of the native tribes that captured him. Being cannibals, they dismembered his body and ate it. Since the ship was docked way beyond its guns firing range, the crew watched in dismay as their captain was being feasted on by the Carib tribesmen. The crew terminated the expedition and sailed back home.

Despite his informative reports, Verrazzano was relegated to the periphery due to other factors. The Spanish and Italians had made great strides with Christopher Columbus and Amerigo Vespucci respectively. They also had conquest of the new land like Mexico.

Even in the periphery, Verrazzano was still honored. Monuments, buildings, and statues have been erected in his name both in the US and Italy.