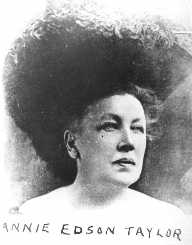 Anna Edson Taylor was the first person to take a ride down the Niagara Falls in a barrel and survive. She was a schoolteacher by profession, and her primary motive behind this aforementioned outrageous act was to garner some fame and money. But sadly, the latter evaded her.

The New Yorker Annie Edson Taylor was born on October 24, 1838. Her father died early but left sufficient money for her and seven other siblings to lead a comfortable life. She studied the art of teaching and became a schoolteacher. During her adolescence, the women’s suffrage movement was gaining momentum. She married early, but her husband died in the Civil War. Distraught and broke, Taylor spent some time travelling around the country doing odd jobs before finally returning to Michigan.

Anna Edson Taylor was in a state of despair, and extreme poverty led her to take a wild decision. She read about wannabe daredevils trying to make it over the falls and made up her mind to do the same – to become the first person to go over the Niagara Falls in a barrel. The Pan American Exposition seemed like a perfect setting to do so. It was a custom-made barrel that she used with cushions lining up the walls and filled with air with a bike pump. She was fastened with a leather harness, and a 200-pound anvil also helped her balance the weight.

The ordeal lasted around 20 minutes as the barrel got engulfed in the foaming brine and reappeared near the Canadian shore. Miraculously Anna Edson Taylor survived managing to get away with just a minor gash on her forehead. This outrageous act coupled with some publicity gimmick like reducing her age by 20 years, did earn her some fame.

But, the stardom didn’t materialize into monetary benefits. The few bucks she earned were by way of autographs and posing with her barrel, but her manager Frank M. Russell decided to pile more misery upon her by fleeing with her prized possession and most of what she had earned was consequently spent on hiring private sleuths to retrieve the barrel.

Anna Edson Taylor's later years were as eventful as before. She dabbled in many casual jobs, conniving and designing plans to make a lot of money in a shortcut way. She tried her hand in the stock market, gave clairvoyant sessions and therapeutical remedies to locals, attracted publicity by openly announcing to pull off another similar attempt, shared her thoughts to the media about penning a novel, etc.

Post Taylor’s audacious stunt, laws were made to prohibit people from taking the plunge into the mighty cataract. But that didn’t stop madcaps from emulating Taylor’s feats over the years. Some casualties were inevitable.

At age 17, Anna Edson Taylor married David Taylor. But unfortunately, life took a sad turn as her only child died as an infant. Soon after, her husband was killed in the Civil War. Taylor passed away in 1921 at the age of 82. She was buried near the Niagara Falls in the ‘Stunters Section’ of Oakwood Cemetery.