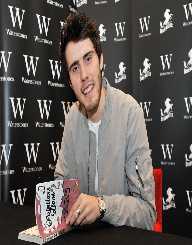 Alfie Deyes then released his autobiography The Scrapbook of My Life on March 24, 2016. The social media sensational have three YouTube channels, PointlessBlog, PointlessBlogVlogs and the PointlessBlogGames.Alfie Deyes who started his first channel at the age now has millions of subscribers. He is currently signed to the talent agency Glean Futures.

Alfie Deyes was born on September 17, 1993. He had his education at the Verdean School in Brighton. Other vital information about his childhood life is not to the public but is it known that his sister Poppy Deyes is also a blogger and vlogger. Deyes created his first YouTube account while in school.

In December 2013, Yahoo! News named him among the"12 Web-savvy entrepreneurs to watch". The following year, he was also featured on the cover of the January edition of Company magazine for "Generation YouTube." Throughout his YouTube career, he has collaborated with other YouTubers like Tanya Burr, Louis Cole, Grace Helbig, Miranda Sings, Tyler Oakley and several others. Alfie Deyes has also collaborated with the likes of Ariana Grande in videos for the YouTube’s You Generation network. He partook in activities of the Guinness World Records OMG! Channel (GWRomg) in 2013.

Aside from being a YouTube sensational, Alfie Deyes ventured into the writing of books. In 2014, he signed a contract with Blink Publishing as the sole publisher of his upcoming books. In September that year, the company released his first book The Pointless Book. The book which was both journal and activity book came with a free downloadable app and social media integration. On March 26, 2015, he released The Pointless Book 2, which had similar features as the first edition. The book successful and just one week after the release became the second best-selling book. Deyes subsequently released The Scrapbook of My Life on March 24, 2016.

Aside from being visible on social media and working as an author, he has featured on radio and television. In 2014, he featured in the single Do They Know It’s Christmas? of Band Aid 30 charity subgroup in their bid to raise money for Ebola virus epidemic in West Africa. He also joined the YouTube Boyband as part of their initiative to raise money for Comic Relief. Deyes together with the following vlogger Marcus Butler appeared on Nick Grimshaw’s radio show The Radio 1 Breakfast show on November 2014.

Alfie Deyes is in a relationship with Zoe Sugg, who is also a Youtuber since 2014. The two has been living together in Brighton, England. In 2015, he was selected among Debrett’s 500 most influential people in Britain under the media category.