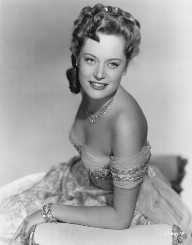 Margaret Alexis Smith was born on June 8, 1921, in Penticton, British Columbia. Her mother was a Canadian, but her father, a Scott. When she was about a year old, the family relocated to Los Angeles. In 1939, both of her parents became naturalized citizens of the United States, which also allowed her to obtain U.S. citizenship.

Smith grew up in Southern California and attended the Hollywood High School. She made her professional debut when she was only 13 years old. Smith performed ballet at the Hollywood Bowl. In 1940, Smith was discovered at the Los Angeles City College, when she was acting in a school production. A Warner Brother’s talent scout noticed the young actress and offered her an opportunity in acting.

After being discovered at college, Smith was signed to Warner Brothers. She made her first appearances on the big screen in minor roles, most of which were uncredited. It took several years for her to make her career blossom. Smith’s first credited role was in the 1941 film Dive Bomber. She played the female lead opposite Errol Flynn. Her next big project The Constant Nymph in 1943 led to Smith gaining bigger parts in the film.

During the 1940s, Smith began appearing together with the most popular stars of the time. She starred with Errol Flynn in the 1942 film Gentleman Jim and 1945 film San Antonio. In 1944 she starred with Fredric March in The Adventures of Mark Twain in 144, and the following year with Humphrey Bogart in Conflict and 1947 the two were seen together again in The Two Mrs. Carrolls. Smith has cited the 1951 film Here Comes the Groom as her most favorite project, starring alongside Bing Crosby.

While working on her film projects with Warner Bros., Smith met the actor Craig Stevens. The two developed a romantic relationship and got married in 1944. She and her husband co-starred in Jean Kerr’s play Mary, Mary and Cactus Flower. Smith toured with several stages plays in 1955 with the National company Plan and Fancy.

Smith was critically acclaimed for her singing and dancing performance in the Hal Prince’s Broadway production of Stephen Sondheim’s Follies. This was her Broadway debut, and for her performance, Smith was awarded the Tony Award for Best Actress in a Musical in 1972. She was also featured on the cover of 1971 Time magazine. Smith continued her stage performances throughout the 1970s. Her most notable work from the time was the all-star revival of The Women in 1973, as well as the William Inge’s drama Summer Brave in 1975. Smith was nominated for another Tony award for her work on the 1978 musical Platinum. After Platinum closed after only a short run, Smith began working as the madam in The Best Little Whorehouse in Texas- a play she toured for more than a year.

After the success of her stage career, Smith returned to the big screen in the 1975 film Once Is Not Enough. At the time she was 54 years old. Smith also starred with Martin Sheen and Jodie Foster in The Little Girl Who Lives Down the Lane. One of Smith’s final film roles was in the 1986 crime comedy Tough Guys. She once again starred with Kirk Douglas and Burt Lancaster. She also had a recurring role in the TV series Dallas. Smith was nominated for an Emmy award for her appearance in the TV show Cheers in 1990.

Alexis Smith died of brain cancer in 1993, just one day after her 72nd birthday. She spent 49 married to Craig Stevens, but the couple never had any children. Her last film, The Age of Innocence was released shortly after her death.