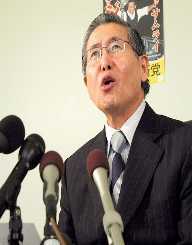 Alberto Fujimori was born on July 28, 1938, in Lima. He was born to Mutsue Inomoto Fujimori and Naoichi Fujimori. In 1934, his parents immigrated from Japan to Peru. Fujimori was brought up alongside three siblings. He attended La Rectora for his primary education. Fujimori learned to speak Spanish while in primary school. In 1957, he joined Universidad Nacional Agraria La Molina where Fujimori pursued a degree in Agricultural Engineering. He graduated from the university in 1961. Fujimori later worked as a mathematics lecturer at the university after his graduation. In 1964, Fujimori moved to France to study physics at the University of Strasbourg. In 1969, he graduated with a Master’s Degree in mathematics from the University of Wisconsin- Milwaukee in the United States of America.

After graduating, he moved back to Peru. In Peru Fujimori became the dean of the Universidad Nacional Agraria in 1984. He was also appointed rector of the university. During his time in the university, he also hosted the show ‘Concertando’ for Channel 7. In 1990, Fujimori founded a political party known as Cambio 90. In the same year, he contested the presidential elections and won against his contender, Mario Vargas Llosa. Fujimori was named the First Man of Asian Origin to form the government in a Latin American State. As President, he ensured the economy of Peru became stable. In 1995, Fujimori was elected as President for a second term after he won against Javier Perez Cuellar. During his reign, his took action against police officers who were in the habit of violating human rights.

Alberto Fujimori reign also saw the signing of the peace treaty between Ecuador and Peru. His popularity demeaned when it was discovered that he had ordered the forceful sterilization of more than three hundred thousand women in order to control the ever growing population in Peru. In 2000, Fujimori was re-elected as president for the third time, but he stepped down since the people were not ready for another government headed by him. In 2009, Fujimori was tried in court for instances of human rights violations. He was found guilty and sentenced to twenty five years imprisonment. He was later found guilty of bribing Vladimiro Montesinos and was added seven more years to his sentence.

In 1974, Alberto Fujimori married Susana Higuchi with whom he had four children. In 1994, he divorced his wife in public, and this led to immense damage of his reputation.  He is currently serving his sentence in prison.