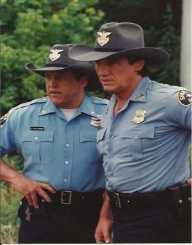 Alan Autry was born Carlos Alan Autry on the 31 July 1952 to Verna Brown and Carl Autry in Shreveport, Louisiana. After his parents had divorced, Autry moved to California with his mother. His mother remained a migrant field worker, and the family moved a lot due to his stepfather’s work. Later the family settled in Riverdale, California. For a while he used the name, Carlos Brown.

Alan Autry was a pupil at Riverdale High School, graduating in 1970.  During his high school years, he joined the football team where he excelled as a quarterback. He received a scholarship to the University of the Pacific, Stockton, California and obtained a BA degree.

Alan Autry was planning on a career in education with the Green Bay Packers offered him a position as a backup quarterback (1975). He played a few games in 1976 but was later dropped by coach Bart Starr.

Around the same time, he became interested in acting as a career. He was introduced to Robert Altman by a mutual friend, and this led to a role in Remember My Name (1978). He appeared on television in Cheers, The A-Team, Dukes of Hazzard and Newhart. In 1988 he cast in the role of Sergeant Skinner in the television series In The Heat of the Night (1988-1995).

In 2002 he wrote, produced and directed a television movie The Legend of Jake Kincaid for his production company Dirt Road Productions.

A Republican, Alan Autry was elected mayor of Fresno, California in 2000 and was subsequently reelected in 2004. A popular mayor he was financially conservative and was concerned with the problem of homelessness although he later admitted that his perhaps policy was too harsh. As a politician, he also opposed gay marriage.

Alan Autry's first wife was Vicky Brown. They married in 1980, divorced in 1986 and had one child. He then married Kimberlee Autry in 1994, and they have two children.

Early in his Hollywood career, Alan Autry had substance abuse problems, but after becoming religious, he overcame his issues.

In 1982 he met his biological father and shortly afterward reverted to using the surname Autry. Through his father, he is a distant cousin of singer Gene Autry.

In 2006, Governor Arnold Schwarzenegger appointed him to the California State Film Commission. Between 2008 and 2011, Alan Autry hosted a radio talk show in Fresno on KYNO AM 940.

Alan Autry is a Christian.