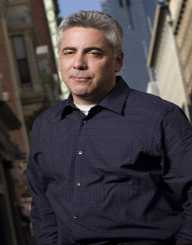 Adam Arkin is an American actor and director.  He has had major roles in TV shows such as Chicago Hope and Sons of Anarchy.

Adam Arkin was born on August 19, 1956, in Brooklyn, New York.  His father Alan Arkin is an Academy Award-winning actor.

Arkin's acting career started when Adam Arkin was about thirteen years old.  He was in a commercial in 1960.  However, it was his cameo appearance in the television series Happy Days that stands out as his debut.  From that point on, Adam Arkin continued making appearances on other television movies and series.

In 1977, Adam Arkin got his first major role in the television comedy Busting Loose.  The next year he had a role as Private Billy Zylowski in the three-part TV mini-series Pearl.  Most of the 1970s and 1980s had Adam Arkin working as a guest actor or in series that did not last more than a season. One such series was Tough Cookies in 1986.  In 1987, Arkin had a recurring role in the TV series A Year in the Life which started as a mini-series in 1986.  Adam Arkin also had spots in major series such as China Beach and Knots Landing. As Adam Arkin earned more exposure in front of the camera, Adam Arkin was able to find more roles that recognized his talent.  Adam Arkin portrayed “Adam” in Northern Exposure, which earned him a Q Award.

Adam Arkin was also recognized by the Emmy Awards and Screen Actors Guild for his role in the movie Chicago Hope.  Most audiences recognize him from his appearances in the movies Hitch along with Will Smith and the horror movie Halloween H20:  20 Years Later. Adam Arkin is also a voice actor.  Adam Arkin has used his voice talents in animated series such as Star Wars, A New Hope, The Voyage of the Corps of Discovery, and The National Parks.

With more than forty years in a career entertaining people, Arkin has been involved with many television series, radio, and movies.  Whether he is acting or directing, he stands out