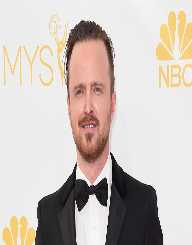 Aaron Paul is one of those actors who bring such flair to a character that they make it their own.

Aaron Paul is most famous for playing Jesse Pinkman, the protégé of Walter White’s character in Breaking Bad, the critically acclaimed TV drama that ran for five years successfully.

Paul’s career has been on the rise since then, and he has made appearances in several popular TV shows and films.

Born in Emmet, Idaho, Paul’s full name is Aaron Paul Sturtevant. He has four siblings and is the youngest child of his parents, Robert and Darla Sturtevant.

His father Robert is a Baptist minister. He has English and German ancestry.
Right from an early age, Paul dreamed of being an actor.

To realize this dream, he shifted to Los Angeles when he was 17.He attended the Centennial High School in Boise, Idaho.

Starting his career in the late 1990s, Aaron Paul has established himself in the acting industry with notable roles. Following his performance in Breaking Bad, his career graph is still increasing.

After arriving in Los Angeles, the first few jobs that Paul landed were mostly commercials. One of the popular ones was a Korn video.

To support himself, Aaron Paul also worked as an usher in a Los Angeles movie theater. His first few appearances included an episode in Beverly Hills, 90210 (1999), and CSI: Miami.

Paul’s talent was recognized on a larger scale for the first time when he played Scott Quittman opposite Amanda Seyfried in the movie Big Love.

His performance earned him a role in the 2008 TV series Breaking Bad. Unsure of whether the show would air, Aaron Paul, took the role of Jesse Pinkman, sidekick to the show’s titular character.

The audience so well received Paul's performance that the show creators decided to keep the character alive for the entire series.

That was amazing as the character was supposed to be killed off in the first season itself.
Breaking Bad was a major turning point in Paul’s acting career. It earned him 5 Emmy nominations of which he won two.

Following the success of Breaking Bad, Aaron Paul has received many interesting projects. This includes the role of Joshua in Exodus, and the crime movie Triple 9. He also appears in the TV shows BoJack Horseman and  The Path.

Aaron Paul married Lauren Parsekian on May 26, 2013. They met each other in a music festival in California.The couple resides in their home in Los Angeles.Paul has a taste in music, and he is a fan of the rock band Pearl Jam.