Cartomancy, the practice of using cards to gain insight into the past, present and future, has been around for a long time. Tarot began as just another type of playing cards. In the 1780s, after a number of prominent occult writers and theorist proposed some esoteric origins for the cards, they became a popular divination tool.

There’s a lot of different explanations people have come up with to explain how exactly tarot reading works to predict the future. Like the ouija board, some believe tarot is a way of tapping into the divine forces or even our own consciousness. Others believe that tarot reading is just for entertainment. Regardless of where you stand on its authenticity, tarot reading is a good way to initiate self-reflection.

A tarot reading not only predicts the future, but shows you the past and present forces that impact where you stand in different aspects of your life. Typically a tarot reading focuses on a specific category: your career, your family, your future, and of course love and relationships. 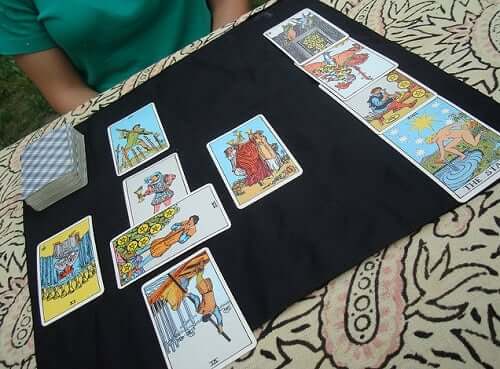 Love is one of those things that continues to mystify us, so it’s no surprise that questions about relationships often come first and foremost when someone seeks a tarot card reading. So how does one begin to seek answers from this most mystical form of card playing?

There are numerous standard decks for tarot cards such as Tarot de Marseille and Etteilla’s Egyptian Tarot but for simplicity’s sake let’s stick to one of the most well know decks, the Rider-Waite Tarot. All tarot decks contain 78 cards, divided into suits, but the illustrations and symbols used on the individual cards differ greatly. The Rider-Waite deck is divided first into major Arcana, also called trump cards, and minor Arcana, known as suit cards.

There are 21 major Arcana cards and each one has its own meaning. Unless you’ve managed to memorize the interpretations of all them, I would suggest keeping a reference guide handy while doing your tarot card reading. As an example though, let’s look at the first two trumps in the Rider-Waite deck.

The magician card signifies one’s abilities and talents, whereas the high priestess card is associated with the presence of the divine and the mysterious that are concealed within the divinities. The minor Arcana cards are divided into 4 suits, each containing 14 cards. These suits are wands, pentacles, cups and swords. Again, each of these cards has it’s own individual meaning. The images displayed on each card are, in some sense, meant to be self-explanatory and symbolically simple but there may be visual cues and references which an unpracticed reader can miss.

Steps For a Love Tarot Reading

Before beginning your love tarot reading it is important that you are relaxed. Take some deep breaths. Clear your mind in whatever way works best for you. You need to be receptive to any message that is being communicated to you through the cards. A person’s emotions have a way of interfering with the tarot’s effectiveness. Some practitioners also believe that previous readings can leave a residue on the deck which will affect the reading. The best way to clear the residue is by making sure that the cards are thoroughly shuffled. Divide the major and minor Arcana into separate piles and shuffle each eight times. Number symbolism of Eight is considered a sacred number in the esoteric world.

Once the cards are shuffled, pick one card from the top of the major Arcana pile and turn it over. This card is called the significator. It represents the querent or tarot reader in the spread of cards. Next, divide the minor Arcana into three equal piles. Flip over the top card from each of the stacks. There is a variety of ways to approaching this card configuration.

Some tarot readers will assess each card as an embodiment of the different realms. For example, the first card represents the physical world – what is going on with the querent on a material level; the second card represents the mental world, and the third card is indicative of the spiritual realm. Another and more popular method of reading the cards involves looking at three minor Arcana cards as emblematic of the past, present and future. The method to deploy in interpretation depends mostly on what type of answers you are seeking

As a practical and more thorough demonstration, let’s pretend that we are doing a reading and looking for answers about love and relationships. The first minor card represents the querent in the relationships and could be emblematic of his or her personal problems with a specific relationship or relationships in general, such as fears, insecurities, and emotions. In this case let’s say the first minor card we draw is the two of cups. Take note of whether the card is upside down or rightside up. This will drastically alter the meaning of the card and the spread.

The meaning of the two of cups is said to related to the interrelation of the sexes and indicates a favorable outcome in matters of love and pleasure. If it is reversed, however, it indicates passion, which is not drastically different than the original meaning. Other cards have a more drastic change in their meaning when reversed. Overall, this card is a sign that the querent is in good place with his or her romances.

The second minor card represents the relationship’s current dynamic and any mutual emotions shared by the querent and his/her partner. In this instance, let’s say we pulled the knight of cups. The knight of cups, shown as a graceful, but not threatening knight on horseback against a background of mountains and a river, indicates an arrival or invitation of some kind. In the reverse position however it warns of a fraud or some other kind of trickery at play. Let’s assume that the card is in the reverse position.

The final minor card represents the querent partner’s in the relationship, and his or her potential roadblocks with the relationship. We will use the three of swords in this example. The three of swords is depicted as a heart pierced by three swords with a storm brewing in the background. As you can probably guess this is not a super positive card. It generally refers to a sense of removal, alienation and disruption.

Now that the three cards are revealed we can look at how they all go together to paint a vivid portrait of the querent’s relationship. This part is largely intuitive. You will probably see a trend or a connect in the cards pretty easily. In this example reading, the querent’s card shows that he or she might believe that they are in a good spot with their relationship. However, if we look at the next card, a reversed knight of cups, in indicates that there’s some trouble brewing in the mutual sphere of the relationship, with someone perhaps not being entirely honest. Then if we look at the final card, the three of swords, we can assume that it is the querent’s partner who is the source of discontent in the relationship and in fact might be ready to leave the relationship.

If you wish to take it a step further, you can also relate the reading back to the significator card. Remember that this card represents the querent, so if the card is something like The Chariot Card, a sign of quarrels and trouble, that might illuminate the factors that caused this relationship to sour. A tarot reading can be as simple as that – looking at the cards individual meanings and then drawing conclusions based upon how they are positioned within the spread. Hopefully your own readings reveal something a bit more positive!

Share
Previous What Is A Feng Shui Water Urn?
Next 6 Feng Shui Tips For Guest Rooms