Many people may think that the possum is a scary little vermin that should be eradicated off of the face of the earth. This little home and garden nuisance is an annoyance to most people. It makes sense that this animal doesn’t have the most positive symbolism surrounding it, especially when it comes to dream symbolism.

However, the possum is not all that it seems at first glance, at least when it comes to the animal totem‘s symbolism. While you may not want this pest around your home now, you may have a better understanding of the possum once you understand the creature’s spiritual symbolism.


While many animal’s symbolized by their looks, legends, and actions, the possum animal totem is is almost completely dominated by their actions alone. As many people know, possums seem to live to annoy humans. Whether it be digging in your garden or your garbage can, you can be sure a possum loves to do it. These animals love to eat little bugs, and they don’t care if they need to ruin your flowerbed to find some.


When many people see a possum in their lawn, they will call an exterminator or set up a live trap so that the animal can be transported someone else where it will do less harm. This gives the possum some rather negative symbolism for thievery and deceit. 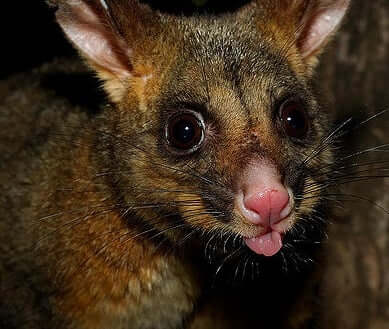 These little creatures aren’t fond of getting caught committing these crimes against your garden, or anywhere else for that matter. The possum usually has two general reactions to getting caught. If it’s trying to act tough, the possum may hiss at you, like a cat or a snake.


It is trying to defend its deeds, or trying to scare you off at least. If the possum thinks that you are stronger than it is, then it might just fall back and play dead, waiting for you to go away.

These two reactions that the possum has adds to the animal’s symbolism. It’s attack response can symbolize strength and bravery, and also confidence. By pretending to play dead the animal symbolizes just about the opposite. It symbolizes fear, death, lies, secrets, and pulling away or hiding.

Speaking of the possum playing dead or acting asleep, let’s look at the possums symbolism in dreams. Dream symbolism is much like the kind of symbolic meanings we have been discussing so far. When it comes to symbolizing dreams, it’s like putting together pieces of a puzzle. You need to analyze the different aspects of your dream in relation to the other parts to understand the whole picture.

While it is not proven that dreams are predictive, it is one psychology theory that things in your dreams do have meanings. Therefore, possum dream symbolism is only important when you see a possum in your dreams, not in your waking life.