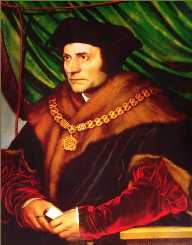 Thomas More was a well-known English Social Philosopher. He was a statesman from the year 1529-1532. More served as a counselor to King Henry 8. Thomas sharply contrasted with the Protestant. He opposed William Tyndale and Martin Luther's Reformation theology. He was a staunch Catholic and a Renaissance humanist.

Like father like son More also obtained a legal education. He eventually joined the king's services and became his respected and most trusted civil servants. After a while, he gained recognition as a scholar as a result of his work 'Utopia'.

Thomas More strongly opposed King Henry's decision to leave the Catholic Church. He even refused to acknowledge the end of the King's marriage to Catherine Aragon. His valued relationship with the King took a turn for the worst when he declined to take the Supremacy Oath. This oath needed him to acknowledge the King's supremacy as head of Church of England.

Consequently, Thomas More was arrested and tried for treason. He was declared guilty and was sentenced to death. Centuries later, Pope Pius XI said him a martyr and canonized him.

Thomas More was the son of Sir John More and Agnes his wife; He was born on February 7, 1478. His father was a prominent lawyer who became a judge later on. More had a comfortable upbringing and attended St. Anthony's school. He was selected as a household page in 1490 for two years. John Morton, Canterbury who was also Chancellor and Lord of England was proud of him. He then nominated More to Oxford University.

He joined Oxford in 1492. He excelled in Latin and Greek after he was tutored by William Grocyn and Thomas Linacre. He later left Oxford to pursue law. In 1946, he enrolled in school at Lincoln's Inn one of the four legal societies in England after his legal training at New Inn. After completion of his training, Thomas More was selected to the bar in 1502.

Thomas More was selected as an undersheriff of the London city in 1510. It was a role that came with high responsibility, and he became well known for his hard work and honesty. In 1514, he became the master of Request and was selected to be Privy councilor that same year. More went to diplomatic missions to Bruges and Calais to meet Charles 5 the Holy Roman Empower.

In 1521, he was knighted and appointed as under-treasurer; Exchequer. Due to his involvement in the king's services in 1517, he had become a trustworthy civil servant. Thomas More was also the king's chief diplomat, personal advisor. In 1523, he was made the knight of the Shire for Middlesex. As a result of his cordial friendship with Wolsey, he was nominated speaker of the House of Commons.

Thomas More became Chancellor in 1525 with the responsibility to lead Duchy of Lancaster. After four years More succeeded Wolsey and became Chancellor. He supported the Catholic Church and was firmly against Protestants reformation which he considered as Hersey. During his reign, six people were torched for Hersey. He wrote pamphlets against Hersey and also banned different books.

During the 1530s More had a significant fall out with the King because More was against divorce. The king needed his signature to annul his marriage which he denied him. The king was desperate to end this marriage, but More was against separation. This relationship worsened, and more resigned from his position citing health issues in 1532.

In 1534, Thomas More was requested to take a supremacy oath. He refused because he could never accept a temporal man to head the England church as supreme governor. This action stirred anger in the King who then had him arrested and tried for treason.

Thomas More is best known for his controversial written work, 'Utopia.' The book is a narrative that discusses the idea of a perfect society. It brings out a fictional religious, political and social societal customs. It was interpreted as criticism of the European community.

Thomas More married his wife, Jane Colt in 1501. His wife was not well-educated at the time of their marriage, so he tutored her in literature and music. They had four children namely: Elizabeth, Margaret, Cicely, and John.

His wife passed on in the year 1501 and in 30 days he remarried. He married Alice Harper Middleton who was a wealthy widow. Although they had no children, More adopted Alice's daughter as his own. More advocated for women's education. He persisted on his daughters getting the same education his sons received.

After the king arrested him, his compliance with treason Act 1534 was brought to question. Thomas More was convicted and then sentenced to death. On July 6, 1534, he was beheaded. In December 1886, Pope Leo XIII beatified him and in May 1935 Pope Pius the XI. Canonized him