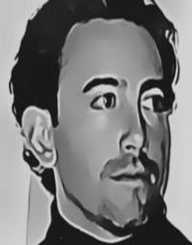 Manuel Ortiz Guerrero was born on July 16, 1897, in Villarrica del Espiritu Santo, Paraguay. His mother died just after giving birth to him, and his grandmother raised Guerrero.

Guerrero attended the local school in Villarrica and was a good student. He was not very social and often, shy. After finishing high school, he went to study at the Colegio Nacional de Villarrica and began writing his first poems. After traveling to Brazil with his father in 1912, Guerrero felt ill with leprosy.

In 1914, Manuel Ortiz Guerrero traveled to Asuncion, where he began studying at the Colegio Nacional de la Capital. During his time there, Guerrero established himself as a leader and a poet. His first poems were published in the student magazine Revista del Centro Estudiantil. After publishing his first poems, the local newspapers began showing interest in his work.

Guerrero quickly gained popularity and audience. One of his best known early works is the poem Loca, which was first published in the Letras magazine. During the 1920s, Guerrero published several poems, such as Pepitas, Surgente, and Nubes del Este. Besides his work on poetry, Guerrero also wrote plays Eirete, El crimen de Tintalila, and La Conquista. He also wrote lyrics for songs of his friend Jose Asuncion Flores. In the 1920s, he established the magazine Orbita and opened a publishing house Zurucu’a. Through his publishing house, Guerrero edited and released pamphlets, receipt books, brochures and other works. Guerrero’s only collection of poems “Nuggets” was released in 1928.

Manuel Ortiz Guerrero was a modernism writer, a status, which he established with his poem Loca. He mostly wrote in Spanish and Guarani. Guerrero wrote his poems on his typing machine and sold them door to door. Throughout his life, he struggled with leprosy and by the end of his life, he was scared. His struggles were reprised in the brochures Cantimplora, a testament to the painful path of the poet.

In 1921, Manuel Ortiz Guerrero married Dalmatia. The couple moved to Asuncion in 1922 and later built a house in San Lorenzo. He died on May 8, 1933, in Buenos Aires. After his death, two of his works were published- Complete works in 1952 and Sand from my country in 1969.