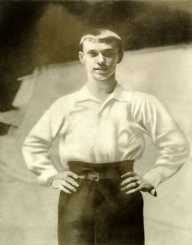 Vaslav Nijinsky was born on March 12th, in 1889. He was a Polish descent. Nijinsky was a well-known choreographer and a ballet dancer. Due to his prowess in ballet dancing, he was regarded as one of the best male dancers during the 20th century. Part of his admiration came from the fact that he could easily dance to en pointe. This was considered as a difficult dancing move that greatly challenged male dancers.

Vaslav Nijinsky was born on March 12th, 1889. His place of birth was in Kiev in the Russian Empire which is current Ukraine. Both of his parents were also polished descents. His father was called Tomasz Ni?y?ski, and his mother was named Eleonora Bereda. Nijinsky parents were both experienced ballet dancers. His mother, for example, began dancing when she was still young. This is an activity she engaged in to earn a living since she was orphaned while she was still young.

In 1900, Vaslav Nijinsky enrolled with the Imperial Ballet School. Here he was taught by renowned ballet legends such as Enrico Cecchetti, Sergei Legat, and Nicholas Legat. After some time, he began to obtain supporting roles in several ballets including Swan Lake, Sleeping Beauty and The Nutcracker. Owing to his dancing talent, Nijinsky earned himself a scholarship; the Didelot scholarship. His dancing talent also took him places with different productions. This, however, had an impact on his education as he was often absent from class. His grades were negatively affected as a result.

Vaslav Nijinsky’s career officially took off in 1907. Since he had been training for some time now, he did not begin at the lower level. Rather, he began as a coryphée while working with the Mariinsky theatre. At first, he took minor ballet roles. Nonetheless, Nijinsky focused on showcasing the areas where he was talented. In subsequent years, he got several solo performing opportunities.

The following year, he crossed paths with Sergei Diaghilev, an opera producer, and an art critic. This marked his career turning point. Diaghilev played a major role in managing Nijinsky’s budding career. For example, Diaghilev ensured that Nijinsky had performances lined up for him. This occurred after he organized tours to Paris. This gave Nijinsky an opportunity to work with notable dance and ballet companies. During this trip in 1909, he played a lead role crowning the entire trip as a commercial success to his career.

Some of the performances that were later regarded as his signature acts were the likes of Cleopatra, Le Pavillon d'Armide, and The Feast. Beginning 1907, Vaslav Nijinsky was often a guest entertainer at the Bolshoi Theatre situated in Moscow. In 1910, he played the role of Wind God Vayou while performing Le Talisman. This role brought huge fame to his side.

With the experience that Vaslav Nijinsky now had in ballet dancing, he not only danced but he also tried out choreographing. His main idea was different from conventional ballet and his ideologies were considered as controversial.

In 1913, Vaslav Nijinsky married Romola de Pulszky. The two were blessed with two daughters in their relationship. Nijinsky’s health deteriorated after suffering a nervous breakdown in 1919. His last 30 years were a huge challenge to him as he was frequently in and out of hospitals.

Vaslav Nijinsky passed away on April 8th, in 1950. His cause of death was due to kidney failure. He died at the age of 61.