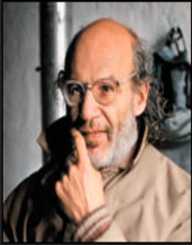 Alexander Grothendieck was born on 28th March 1928 in Berlin. Alexander's parents were Alexander Schapiro and Johanna Grothendieck who were anarchists. Schapiro had a Hassidic origin and spent part of his life before 1922 in prison in Russia. Johanna was from a Protestant upbringing and worked as a journalist. When Alexander was born, Johanna was married to a fellow journalist named Johannes Raddatz, and his name was recorded as Alexander Raddatz. However, the marriage ended in 1929 and Shapiro declared his paternity for Alexander. He did not get married to Hanka.

Alexander Grothendieck was then brought up with both of his parents in Berlin. At around 1934, Alexander's father relocated to Paris as a result of Nazism and was later joined by Alexander’s mother. Alexander was left with a Lutheran pastor named Wilhelm Heydorn, who became his guardian. At this time, Alexander’s parents were involved in the Spanish civil war. During the World War II, Alexander Grothendieck joined his mother in Paris, where they lived in camps meant for displaced people. Later, they lived in a village named Le Chambon-sur-lignon for a couple of years. In 1942,

Alexander Grothendieck's father was murdered in a concentration camp called Auschwitz, and it was a challenging year for him. Later, Alexander joined College Cevenol to attain education. Anti-war activists and protestant pacifists founded this school. While there, Alexander found out that he had a great love for mathematics.  As a result, Alexander later pursued further studies in Mathematics at the University of Montpellier.  Alexander conducted personal research and studies and found out about the Lebesgue Measure. He continued with such personal and independent studies for about three years.

In 1950, Alexander Grothendieck joined the University of Nancy for Ph.D. studies and came up with his thesis under the tutelage of the likes of Jean Dieudonne and Laurent Schwartz.  Alexander then graduated with a doctorate in the year 1953. By then, Alexander had become a top expert in studies of topological vector spaces.Alexander then began to focus on homological algebra and algebraic geometry in 1957.

Alexander Grothendieck began his career by teaching, mostly in America and Brazil. Alexander was appointed as a professor at` Institut des Hautes Etudes Scientifiques ‘in 1958. This was a private research institute. While there Alexander gained a lot of attention as a result of his seminars which were highly productive. While there Alexander also modified the theory of Algebraic geometry. As a result, Alexander was widely recognized and praised for his contribution. As a lecturer there, Alexander tutored a couple of brilliant students, for example, Jean-Louis Verdier, Jean Giraud, and Micheal Demazure. He worked at the Institute for more than a decade.

Later, Alexander Grothendieck published his treatise on Algebraic geometry, entitled `the elements de Geometrie algebrique,’ and was helped by Jean Dieudonne.  It was released in eight bits, during the period between 1960 and 1967. In the series, Alexander brought out the systematic foundations of algebraic geometry concept about the aspect of schemes.  After political activities, Alexander later came back to the academic scene as a professor, working at the University of Montpellier. Alexander Grothendieck then retired in 1988.

As a result of his suffering due to the World War II, Alexandre Grothendieck was a Pacifist. Alexander had extreme political views and was against Soviet military expansionism and the United States act of interfering with Vietnam’s affairs. Due to some of his views, Alexander resigned from his job at the IHES institute in 1970 when he discovered that the military partly sponsored it. In association with fellow mathematicians Pierre Samuel and Claude Chevalley, Alexander formed a political group named Survive, which was later changed to Survivre et Vivre. Its objective was to promote ecological issues and was against the military.

Alexander Grothendieck was awarded the Field medal which is also referred to as `Nobel prize of mathematics’ in 1966. He was offered the Crafoord prize which he declined in 1988.

Alexander Grothendieck got married to a lady named Mireille Dufour. Together, they had three children. Alexander also had an affair with his landlady when he was living in Nancy, which led to the birth of a son. More so, he had another child with a woman called Justine Skalba, whom he lived in the early 1970s. For the rest of his life, Alexander isolated himself a bit and relocated to a new address in 1991 where he kept his address very private.

Alexander Grothendieck died on 13th November 2014 at Saint-Girons hospital. He was 86 years of age.