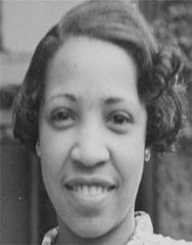 Loïs Mailou Jones was a prominent American artist and educator. Born on November 3, 1905, she was versatile in her work and adapted different theme ranging from traditional landscape to Africa-themed abstraction throughout her career that spanned about seven decades. She gained notoriety for her works while living in Paris from the 1930s to 1940s. Jones started her career as a textile designer before venturing into fine arts. Her paintings were inspired by Africa, the Caribbean, and experiences in life. She was a proponent of the Harlem Renaissance movement.

Loïs Mailou Jones was born on November 3, 1905, in Boston, Massachusetts to Carolyn and Thomas Vreeland Jones. He father was a building superintendent, and lawyer and her mother was a cosmetologist. He parents identified her extraordinary drawing talent at a very young age and therefore contributed immensely to its development. The family bought a house on Martha’s Vineyard where she met influential people in the field of arts including sculptor Mata Warrick Fuller, who influenced her works.

Loïs Mailou Jones received training at High School of Practical Arts in Boston from 1919 to 1923. While there, she also had night classes at the Boston Museum of Fine Arts. The young talented artist also apprenticed in costume design with Grace Ripley. While there, she experimented with Africa mask influences through which she later created costume designs for Denishawn. She continued her education at the School of the Museum of Fine Arts in 1923 to study design and graduated in 1927. In 1828, she graduated with a degree in design from the Design Art School of Boston. The same year, she enrolled at Harvard University majoring in painting.

At the age of 17, Loïs Mailou Jones held her debut solo exhibition in Martha’s Vineyard. After graduating from the Design Art School of Boston, Jones worked with the Schumacher Company in New York City and the F.A. Foster Company, Boston. Jones later in 1945 received a BA in art education from Howard University.

Loïs Mailou Jones started her professional career spanning about seven decades from the 1930s until her death. She moved according to time with her style evolving to suit the order of the day and her life experiences through extensive travelling. Jones also adopted different techniques, themes, mediums, and influences from Africa and the Caribbean. Jones through her career as an artist and educator became an advocator and mentor for African-Americans in the field.

In the 1930s, Loïs Mailou Jones began exhibiting her design and arts with the William E. Harmon Foundation with works including Negro Youth, 1929. With time, she abandoned plans to focus on painting, experimenting with portraiture. During the start of the Harlem Renaissance, Jones spent summers and frequently visited Harlem, where she developed her career in arts. Her works during this period include The Ascent of Ethiopia and Saturday Evening Quill.

Life in Paris and Later Works

Loïs Mailou Jones earned a fellowship to study at the Académie Julian in Paris in 1937. She felt welcomed in France and enjoyed her stay there, as they were very receptive compared to those times in the US. Jones worked extensively while in France producing numerous paintings by exploring the enplein air technique of painting. She would use this style throughout her career. Two of her works at the time made it to the annual Salon de Printemps exhibition at the Société des ArtistsFrançais marking her Parisian debut. On her return to the US, she taught watercolour painting at Howard University.

Loïs Mailou Jones painted the African-inspired LesFétiches, 1938 and followed it with Parisian Beggar Woman. She formed a working partnership with painter Céline Marie Tabary, whom she worked with for several years. In 1941, Tabaray submitted Jones’ painting, Indian Shops Gay Head, Massachusetts for the annual competition of the Corcoran Gallery, since works of African-Americans were not allowed to present works themselves. The painting won the Robert Wood Bliss Award and was received by Tabary on her behalf.

Her book Loïs Mailou Jones: Peintures 1937–1951 published in 1952 contained numerous of her works completed in France. She painted Mob Victim (Meditation), illustrating the unjust death of many male Africa-Americans men through lynching in the 1940s. Her other works include Dansun Café à Paris (Leigh Whipper), The Janitor and The Pink Table Cloth.

She worked on several paintings in Haiti from 1954 and exhibited 42 of them in her show Oeuvres des LoïsMailou Jones Pierre-Noël sponsored by the Haitian first lady. She was awarded the Diplômeet Décoration de l'Ordre National "Honneur et Mériteau Grade de Chevalier" for the works. Jones continued to work of several other great pieces, and her works have been exhibited in numerous galleries worldwide.

After graduating from college, Loïs Mailou Jones started a career in teaching. Being refused employment by the Boston Museum School on racial grounds, she was hired by Charlotte Hawkins Brown in 1928. She later founded the art department at Palmer Memorial Institute in North Carolina. Two years later, she joined the art department at Howard University in Washington, DC as a professor of design and watercolour painting until 1977, when she retired. She served as a guest professor at Centre D'Art and Foyer des Artes Plastiques in Port-au-Prince, Haiti in 1954.

Lois Mailou Jones married Haitian artist, Louis Vergniaud Pierre-Noel in 1953 after knowing each other for 20 years. They separated in 1982. Jones died on June 9, 1998, at age 92 at her Washington home. She was interred at the Oak Bluff Cemetery in Martha’s Vineyard.