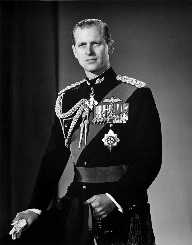 Prince Philip has four siblings, of which he is the youngest – he has four older sisters. As a baby, Philip was oblivious to the danger around him. Just after his birth, his grandfather, Louis Mountbatten, (formerly Prince Louis of Battenberg), died in London, where he lived.

His mother took him while she attended the memorial, after which they returned to Greece. Philip’s father had stayed in Greece, as the Greco-Turkish war was on, and he was in command of one of the army divisions.

Greece lost the war, and in 1922, Philip’s uncle, King Constantine I, had to abdicate. Philip’s father, Prince Andrew was arrested, along with many others. Senior army and politicians were executed, but fortunately, Prince Andrew escaped with his life, although, the family was exiled from Greece for life. They moved to Paris, France, where they lived in a relative’s house for some time.

Philip began his schooling in Paris, but after a short time was sent over to the UK to attend Cheam School. He lived with his grandmother, Victoria Mountbatten, at Kensington Palace during this period. It was during this time that his sisters all married into families of German nobility, and his father moved to Monte Carlo. Sadly, his mother had been diagnosed with schizophrenia and committed to an institution.

Prince Philip returned to Germany to attend a school which was owned by a family member, so school fees didn’t have to be paid. As the Nazi regime began to rise, in 1937, the owner of the school fled to Scotland and started another school there, called Gordonstoun School. Prince Philip was moved soon after as concerns were growing about the Nazis. He left school in 1939 and joined the Royal Navy.

The year after he joined the Navy, Prince Philip graduated from the Royal Naval College and immediately went into service. He served in many battles, including World War II, over the next few years. In mid-1942, he was promoted to lieutenant, and later that same year, attained the rank of first lieutenant, one of the youngest in the Royal Navy.

In 1946, Philip returned to the UK from active duty and was stationed as an instructor at one of the bases of the Royal Navy.

After his wedding in 1947, Philip resumed his naval career. By 1952 he had reached the rank of commander, but his active career finished in 1951.

King George VI was in ill health for some time, and in early 1952 when Prince Philip and Elizabeth were in Kenya as part of their tour of the Commonwealth, the King died. Elizabeth became the Queen, and they immediately returned home to Britain.

When Elizabeth became Queen Elizabeth II, Philip moved into the role of consort to the Queen. Over the years, he has supported his wife in her duties as monarch, often accompanying her to ceremonies, or even carrying out duties on her behalf.

The day before his wedding, Prince Philip had the title of Royal Highness bestowed upon him by King George VI.

On the actual morning of the wedding, he was made the Duke of Edinburgh, Earl of Merioneth, and Baron Greenwich.

In February 1957, Queen Elizabeth II declared Philip a Prince of the United Kingdom. He was formal to be known henceforth, as His Royal Highness, the Prince Philip, Duke of Edinburgh.

During Prince Philip’s time at the Royal Naval College in 1939, King George VI and Queen Elizabeth toured the facility. Philip was asked by the Queen to escort the King’s daughters, Elizabeth and Margaret during the visit.

Elizabeth and Philip fell in love and began corresponding by mail soon after. Seven years later, in 1946, Philip asked the King if he could have Elizabeth’s hand in marriage. The King agreed on the condition that the engagement would not be announced until Elizabeth’s twenty-first birthday.

During the period of waiting, Philip adopted the surname Mountbatten from his mother’s side of the family and became a naturalized British citizen. In July 1947, their engagement was announced.

Prince Philip and Elizabeth were married on 20th November 1947. They were married in Westminster Abbey, and BBC radio broadcast the ceremony around the world.

Prince Philip is the patron of over 800 organizations, serving in principal roles for several of them for well more than 20 years. He founded the Duke of Edinburgh’s Award in 1956, to help give young people “a sense of responsibility to themselves and their communities.”