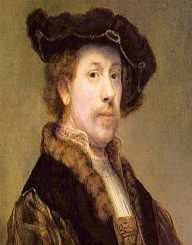 Rembrandt was born on July 15th, 1606. He stands as one of the most celebrated artists of all times. His artistic creativity is evident in his famous portraits. His use of shadow and light during the 17th century was simply outstanding.

Rembrandt was born on July 15th, 1606 in Leiden, Netherlands. His parents were Neeltgen Willemsdochter van Zuytbrouck and Harmen Gerritszoon van Rijn. Rembrandt was the ninth child in this family. The famed artist was born in a wealthy family with his father working as a miller.

From 1612 to 1616, Rembrandt went to his elementary school before enrolling in the Latin School situated in Leiden. At this age, he participated actively in biblical studies. Sources claim that Rembrandt went to the University of Leiden for his college studies.

His special interest in arts made him be apprenticed to a famous history painter called Jacob van Swanenburgh. This historic painter was eminent for reasons that he was good in painting illumination and fire. The skills that he acquired from this painter would later reflect in Rembrandt future paintings. He spent three years training under van Swanenburgh.

After training with his former painter, he went on to apprentice under Pieter Lastman for six months. The painting skill that he acquired from this well-known painter was the placement of figures more so from biblical, allegorical and historical scenes. Other sources argue that Rembrandt got some training from other painters such as Joris van Schooten.

After gaining the skills that he needed to become a professional painter, Rembrandt went back to his native land, Leiden. Now he was well equipped with all that he was necessary to initiate his painting career. After moving to Leiden, he opened up his studio during the mid-1620s. He did this by relying on Jan Lievens who was his fellow painter. At first, he experimented on etchings while at the same time painting biblical scenes.

Soon, his style of painting got creative as he employed the use of light. This made him gain popularity as it depicted his painting prowess. Some of the paintings that portrayed his brilliance in the use of light are Peter and Paul Disputing­ – 1628 & Judas Repentant and Returning the Pieces of Silver – 1629. Within a span of a few years, Rembrandt had become famous and pulled a large string of followers to his side. Aspiring painters began approaching him in his studio with the intention of learning from the painting master.

From 1631 to 1636, Rembrandt did business with Hendrick Uylenburgh. He was an Amsterdam entrepreneur who dealt primarily with different kinds of paintings. During this trading period with his new partner, Rembrandt went large scale with biblical paintings that employed his use of the light technique. Some famous paintings of this period are Danaë­, and The Blinding of Samson both painted in 1636.

After releasing his famous painting The Night Watch, it is believed that Rembrandt did not paint a high volume of portraits anymore. The “Rembrandt Myth” that was going on was that people did not understand him through his paintings. As a result, his works got ignored. His possible failure during this period could be blamed on the poor reception that The Night Watch received or the fact that his wife died during this period. Nonetheless, recent studies find no evidence proving that The Night Watch was poorly received or ignored by his fans.

In 1634, Rembrandt got married to Saskia van Uylenburgh. She was the cousin of his friend Hendrick. His wife had four children with him. However, they were so unfortunate that only one of them stayed alive after birth. Similarly, his wife died while she was still young. According to the sources, these bitter experiences devastated Rembrandt.