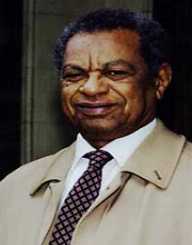 Tayeb Salih was born on 12 July 1929 in Al Dabbah, Nothern Province of Sudan. He received his initial education at a quadratic school and the Gordon College in Khartoum, Sudan. Salih attended the University of Khartoum and, after graduating, continued his studies at the University of London. His initial intention was to work in the agricultural field. However, he spent the most of his life working in broadcasting.

After Salih graduated the University of London, he began working at BBC’s Arabic Service, where he was the Head of Drama department. During this time he also wrote a weekly column for the Arabic language newspaper al Majalla. After working in BBC, Salih was hired by the Ministry of Information, Doha, Qatar, where he worked as the Director-General.

Salih’s works are mostly based on his experience living in the communal village, and it is centered around people and the complexity of their relationships. His first novel, “Mawsim al-Hijra ila al-Shamal” was released in 1966. The book was published in English as Season of Migration to the North in 1969, and since then, it has been translated into more than 30 languages. The book tells a story about a young man, who returns to his home village after studying in Europe and is eager to contribute to his country. The book earned Salih critical acclaim, and years later, in 2001, it was declared as the most important Arabic novel of the 20th century. However, the book was banned in Sudan for many years.

Salih’s next work was a collection of short stories ‘Urs al-Zayn” (The Wedding of Zein), which was released in 1969. The book was made into a drama play in Libya and Kuwait. It was also adapted into a film with the same name and won an award at the 1976 Cannes Film Festival. After the success of his first two books, Salih published several other novels, which were also translated into English. His best-known work includes “Daw al-Bayt” in 1971, “Maryud” in 1976, “Al-Rajul al Qubrosi” in 1978 and “Doumat Wad Hamid” in 1985.

Salih’s last ten years of career were spent as the representative in the Gulf States for UNESCO. After Salih’s death, a yearly award in his honor has been awarded at the Khartoum International Community School. Salih’s “Season of Migration to the North” was voted as one of the 100 Greatest Books in History in 2002.

Salih married Julia Maclean in 1965. The couple lived in south-west London and had three daughters together.
Salih died on February 18, 2009, of kidney failure.