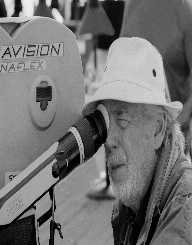 Sven Vilhem Nykvist was a Swedish Cinematographer and academy award winner born in 1922. During his career, Nykvist worked on more than 120 films. Among his best work at the time was with Ingmar Bergman, a producer, and director. In the 1940she started off his career as a simple assistant cameraman and gradually rose to be the successful Cinematographer. It is believed that he was among the best cinematographers of his time. Despite his success, he remained a natural and simple but quite influential man throughout his life.

Sven Nykvist was born on December 3rd, 1922. His place of birth was Moheda, Kronobergs län in Sweden. His parents were devoted Lutheranism missionaries. This nature of their work involved frequent travels to many countries. They particularly spent more time in Belgian Congo. During such times Sven Nykvist along with his siblings were raised by relatives and a Christian children’s home in Stockholm.

His father spent his time as an amateur photographer while in his Mission in Africa. Sven Nykvist developed an interest in this art as well and purchased his first camera when he was 15.his best shot was his photo taken while taking a high jump. This was a good memory as a skilled athlete.

Sven Nykvist went to the same high school as Kenne Fant, Keve Hjelm, and Torsten Lilliecrona. They later became prominent personalities in Television and Theatre industries. He studied in the Municipal School for Photographers located in Stockholm. A year he began his career in the Film Industry. He was only 19 years old at the time.

Sven Nykvist’s first job was in 1942 as an assistant Cameraman in the Sandrews studio. He assisted with the production of The Poor Millionaire. He then met with many prominent film personalities during his career. He met the likes of Hasse Ekman, Lorens Marmstedt, and Viveca Lindfors among others. He later worked in Cinecittà Studios situated in Rome, Italy in 1943 and then returned to Sweden two years later. In 1945 is when Sven Nykvist became a full-fledged cinematographer. His first work in this career was The Children from Frostmo Mountain.

He worked o some small films in Sweden before traveling to Africa to be with his parents. During his time there he came up with a documentary In the Footsteps of the Witch Doctor. This was a documentary on the wildlife of Africa. He returned to Sweden where his association with Ingmar Bergman began in 1953. The two began a successful career path together along with two other cinematographers: Hilding Bladh and Gunnar Fischer. Their film Sawdust and Tinsel premiered in the United States with the title The Naked Night. He later worked for Ingmar Bergman on a full-time basis. They maintained their relationship for over four decades while they produced the best films. Their duo was recognized as the most successful in the field of Cinema ever.

However, he had to stop his career in 1998. He was diagnosed with aphasia which came as abrupt news to him. His work on the film Celebrity produced in 1998 marked the end of his successful career.

In 1973 Sven Nykvist was presented with Academy Award for the category of the Best Cinematography. This was for his contributions in Cries and Whispers. He was also honored with another Academy Award in 1983. This was for Fanny and Alexander also known as Fanny och Alexander.

Sven Nykvist married twice in his life. His first marriage was to Ulla Söderlind in 1952. They divorced in 1968. He then married Ulrika Nykvist. He had a son named Carl-Gustaf Nykvist.

Sven Vilhem Nykvist took his last breath on September 20th, 2006. He died in Stockholm at the age of 83.