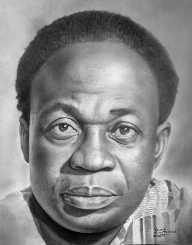 The first President of independent Ghana Kwame Nkrumah was born Kwame Francis Nwia Kofie on the 21 September in 1909 in the south-west area of Gold Coast now part of Ghana. Nkrumah’s father, Kofi Ngongoma, worked as a goldsmith and his mother, Elizabeth Nyanibahr, as a village trader.

His primary education took place at a missionary school run by the Catholic Church after which Kwame Nkrumah enrolled at Achimota College. He graduated from the college in 1930 as a qualified teacher. Between 1930 and 1935 Nkrumah worked as a teacher and saved to fund prospective tertiary studies in the United States.

After completing his studies, he traveled to London England where he was responsible for organizing the 5th Pan-African Congress in Manchester. Nkrumah also co-founded the West African Nation Secretariat with the stated aim of decolonizing the continent of Africa.

Kwame Nkrumah returned home in 1947 and at that stage considered himself a Marxist Socialist and a non-denominational Christian. He was appointed Secretary-General of the United Gold Coast Convention. He led a campaign of civil disobedience calling for an end to British rule, and this led to his removal from the organization. Nkrumah then founded the Convention People’s Party in 1949. The main aim of the party was to install a universal franchise and to allow chiefs a say in the governance of the country. The British refused to consider their demands and Nkrumah then instigated a campaign of civil disobedience.

Nkrumah traveled around the country giving speeches, organizing strikes and boycotts. Matters came to a head in 1948 when during a riot, British colonial police shot three Ghanaian World War II veterans. The veterans had been taking part in a protest march requesting compensation for their war service. Nkrumah was consequently was arrested for encouraging civil disobedience and was imprisoned by the British.

After internal disturbance within the country and international pressure, the British decided to withdraw from the Gold Coast and Togoland Territory. An election was organized to take place in 1951, and Nkrumah’s Convention People’s Party won a landslide victory.

Gold Coast and Togoland Territory merged into Ghana in 1957, obtained independence and Nkrumah became the country’s first Prime Minister. Ghana became the first country in sub-Saharan Africa to be free of colonialism and marked the beginning of other African countries doing the same.

In 1958 a law allowing for imprisonment without trial was passed. The law was targeted at political dissenters, and Nkrumah’s popularity remained high as his government instigated policies that created jobs and improved services. For instance, his government Nkrumah’s government was responsible for the hydro-electric project which resulted in the building of Akosombo Dam between 1961-1965.

After Ghana became a Republic in 1960 and Nkrumah became President. As his popularity waned, due to economic mismanagement and resulting high foreign debt, there was a general strike in 196l. In 1962 an assassination attempt was made on his life in 1962. The government became increasingly more authoritarian. In 1964 Ghana was declared a one-party state and Nkrumah was made a president for life.

In February 1966, when Nkrumah was out of the country, there was a military coup. Upon his return to Africa from a visit to Asia, Nkrumah sought asylum in Guinea where remained living the rest of his life.

On the 27 April 1972 Kwame Nkrumah died in Bucharest, Romania. He was sixty-two years of age. He had traveled to Romania for cancer treatment.