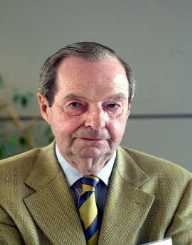 The man behind four James Bond films including Goldfinger, Guy Hamilton was an extremely popular film director from England.  He was interested in movies right from his childhood and had a career that spanned more than four decades.

All James Bond movies he made were hugely successful, and he directed more than 20 movies in his career.

Guy Hamilton was born in Paris, France on September 16, 1922. His father was a diplomat. Guy did his schooling from London and was interested in making movies from an early age. At the age of 16, he began working at the Victorine Studios as a clapperboard boy. He rose to the ranks of an assistant producer within a few years. But World War II started and he had to flee France with his family and shift to England.

For a short time, Hamilton did war service. He was a member of the 15th Motor Gunboat Flotilla. He utilized this experience in his James Bond and other action movies later in his career.

After the war, Guy Hamilton became an assistant director to Carol Reed in 1947. He was part of the crew for Fallen Idol, the 1948 classic.

Hamilton’s directorial debut came in 1951 with the low budget film The Ringer. In 1953, he directed Intruder followed by The Inspector Calls in 1954. His first major film was The Colditz Story in 1955. Guy Hamilton used his war experience to create realistic scenes in the movie, and it became a huge success. This film also marked the beginning of a career where Hamilton was recognized for his directorial talents.

After doing some low budget films, Hamilton directed The Devil’s Discipline. Two years later, he directed The Best of Enemies which was nominated for three Golden Globes. In 1964, Hamilton directed the film he is most known for – Goldfinger featuring the famous spy James Bond. Goldfinger had phenomenal success and earned about $125 million at the box office. The budget of the film was $3 million.

Following this, Hamilton made three more Bond movies titled Diamonds are Forever in 1971, Live and Let Die in 1973 and The Man with the Golden Gun in 1974. All his bond movies were huge blockbusters.

Guy Hamilton also had a few flops as well as the Force Ten from Navarone and The Mirror Crack’d.

After producing a few moderately successful films, Hamilton retired from film-directing. He even turned down an offer to direct Batman.

Despite his popularity and talent, Guy Hamilton did not win any major award. He received several nominations though, including nominations for Golden Berlin Bear Award, and the BAFTA award for Best British Screenplay.

Guy Hamilton had two marriages. His first wife was actress Naomi Chance. After divorcing her, Hamilton married French actress, Kerima. The two met on the set of the film Outcast of the Island.

After retirement, Hamilton moved with his wife Kerima to a Mediterranean island named Majorca.