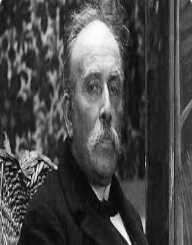 Henri Rousseau was born on May 21, 1844. He was a French post-impressionist painter. He was also a toll and tax collector. He died at the age of Sixty Six years.

Henri Rousseau was born Henri Julien Felix Rousseau on May 21, 1844, in Laval, Mayenne. He was born to a Tinsmith’s Family. He studied at Laval High School. He later won some gifts in music and drawing. He then worked in a lawyers firm and as well studied law there partially. In 1863, he joined the army. In 1868, he went to Paris. In 1871, he became a tax collector for the Paris’ Octoroi.

In 1886, Henri Rousseau started his career by exhibiting at the Salon des Independants.  He painted ‘A Carnival Evening.’ In 1890, he painted ad exhibited ‘Self Portrait’ in the National Gallery in Prague. In 1891, he started being prominent after he exhibited ‘Tiger in a Tropical Storm.’ In 1893, he went to Montparnasse to work in a studio. He also retired in this year hence engaging in part-time jobs. In 1896, he painted ‘Le Moulin (The Mill).’

In 1897, he produced ‘La Bohemienne endormie (The Sleeping Gypsy)’ which became one of his famous paintings. In 1905, his work ‘The Hungry Lion Throws Itself on the Antelope’ was exhibited at the Salon des Independants. In 1907, he painted ‘The Snake Charmer’ under the influence of Berthe, Comtesse de Delaunay. In 1908, Le Banquet Rousseau was formed in his honor.

Some of Henri Rousseau's other paintings included: ‘Boy on The Rocks,’ ‘La Tour Eiffel peinte par Henri Rousseau,’ ‘The Flamingoes,’ ‘The Football Players’ and ‘Pierre Loti’ among others. In 1910, he did and exhibited ‘The Dream’ at the Salon des Independants. This was his final painting.

In 1968, Henri Rousseau married Clemence Boitard with whom he had six children. In 1888, his wife died. In 1898, he married Josephine Noury with whom he stayed with till he met his death. He died on September 2, 1910, of a blood clot in Necker Hospital in Paris, France. He died at the age of Sixty six years of age.