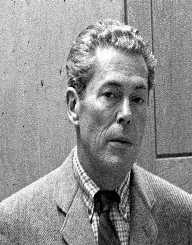 Jacques Monod was born on February 9, 1910. He was a French biologist. In 1965, he received the Nobel Prize in Physiology or medicine for his discoveries regarding genetic regulation of enzyme and synthesis of a virus.

Jacques Monod was born on February 9, 1910, in Paris, France. He was born to Lucien Monod and Charlotte MacGregor. His father was a painter. He was artistically inspired by his father. He attended the Lycee de Cannes. In 1928, he joined the Faculte des Sciences at the University of Paris. He studied natural sciences at the university. In 1931, he graduated with a Bachelor of Science Degree from the University.

Jacques Monod later started pursuing his Ph.D. He then worked with biologist Edouard Chatton at the University of Strasbourg. In 1932, he was inducted as an assistant professor of zoology at the Faculte des Sciences. In 1936, he obtained a Rockefeller fellowship to study genetics at the California Institute of Technology (Caltech). In 1941, he received his Ph.D. in Natural Sciences.

During World War II Jacques Monod played a significant role in the French Resistance. He became the chief of staff of operations for the French Forces of the Interior. He was later inducted in the Pasteur Institute of France. He was recruited as a Laboratory Director in the Department of Andre Lwoff. In 1954, he was appointed the Director of Cell Biochemistry Department. In 1958, he was involved in the PaJaMo experiment together with Jacob and biochemist Arthur Pardee. The experiment revealed that the start of protein synthesis from a gene could take place almost immediately as it enters an E.coli cell.

In 1959, Jacques Monod became the Professor of the Chemistry of Metabolism at the University of Paris. In 1961, he and Jacob researched on the mechanisms responsible for genetic data transfer and the controlling pathways that exist in a bacterial cell that control the activities and synthesis of macromolecules. In 1967, he became a professor at the College de France. He published his book ‘Chance and Necessity: Essay on the Philosophy of Modern Biology’ which expressed his views on the evolution of life which resulted from natural processes. In 1971, he was appointed as the director of the Pasteur Institute.

In 1965, Jacques Monod received the Nobel Prize in Physiology or Medicine jointly with Andre Lwoff and Francois Jacob.

In 1938, Jacques Monod married Odette Bruhl with whom he had twin sons, Philippe and Olivier. He was a musician, and he also loved sailing. He died on May 31, 1976, of leukemia. He was interred in Cannes on the French Riviera.