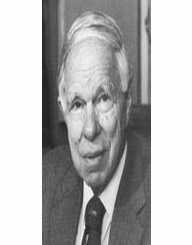 Glen Theodore Seaborg was born 19th April 1912, to Herman and Olivia Seaborg. He was born in Ishpeming, Michigan, in the United States. He was one of two children, with a younger sister called Jeanette. While Glen Theodore Seaborg was still a youngster, the family moved to California. They settled in Los Angeles County. It was shortly after this that Seaborg added an extra “n” to his name to become “Glenn” rather than “Glen.”

Glen T. Seaborg attended David Starr Jordan High School. His mother encouraged him to study bookkeeping, as she felt Seaborg’s literary interests wouldn’t be practical for making a living. While in high school though, Seaborg developed an interest in science, thanks to his chemistry and physics teacher, Dwight Logan Reid. Glen Theodore Seaborg graduated in 1929.

He then went to the University of California in Los Angeles, and he graduated in 1933 with his Bachelor of Arts Degree in Chemistry.

Glen T. Seaborg did his Ph.D. in Chemistry in 1937, at the University of California in Berkeley.

Glen T. Seaborg continued his research, and after reading Otto Hahn’s text, Applied Radiochemistry, he became more specialized in his research and concentrated on artificial radioactivity and nuclear fission. He stayed at the University of California in Berkeley to do his post-doctoral research.

Edwin McMillan, a physicist at Berkeley, discovered neptunium with his team in 1940. It was known as element 93. When McMillan had to leave Berkeley for a short while to assist elsewhere with urgent research, Seaborg  McMillan if he could take over his research. Glen T. Seaborg had been primarily involved, as it was Glen T. Seaborg and his colleagues that had provided the technique that McMillan used to isolate the neptunium. McMillan agreed to the proposal.

Glen T. Seaborg and his colleagues discovered element 94, plutonium, as they continued with McMillan’s research. The discovery was to become very important in the following years when the Manhattan Project research was underway.

As well as plutonium, Glen T. Seaborg is credited as the main discoverer of various other elements. He is known as one of the most prolific discoverers of new atomic isotopes, having discovered more than 100, and is also known as a pioneer of nuclear medicine.

In April 1942, Glen T. Seaborg traveled to Chicago and joined the Metallurgical Laboratory of the Manhattan Project, researching at the University of Chicago. Seaborg’s specific task was to extract plutonium from the uranium. The outcome was achieved by August that same year.

Glen T. Seaborg developed the actinide concept, and as a result, the Periodic Table of Elements was redrawn. Seaborg’s actinide series sits below the lanthanide series. Glen T. Seaborg secured patents for the elements americium and curium. Whilst the curium was not commercially viable, the americium, however, was, and afforded Seaborg royalty income in later years.

When the Second World War was finished, Glen T. Seaborg returned to Berkeley. In 1946, he took on the added responsibility of managing the nuclear chemistry research at the Lawrence Radiation Laboratory. The laboratory was located at the University of California but run on behalf of the United States Atomic Energy Commission.

From 1954 to 1961, Glen T. Seaborg was an Associate Director of the Laboratory. He was also appointed to the General Advisory Committee of the Atomic Energy Commission.

During this period Glen T. Seaborg was also appointed Chancellor of the University of California in Berkeley. He held the position from 1958 to 1961. In 1959 Glen T. Seaborg helped establish the Berkeley Space Sciences Laboratory, and in 1960, the “Glen Theodore Seaborg Report” was tabled as part of being on the President’s Science Advisory Committee, which called for more federal funding in science.

From 1961 to 1971, Glen Theodore Seaborg was appointed Chairman of the Atomic Energy Commission (AEC). His initial appointment was by President John F. Kennedy. During his time as Chairman, Glen T. Seaborg was part of the Limited Test Ban Treaty. The treaty included the US, UK, and USSR when they all agreed to ban testing nuclear weapon detonations above ground. Seaborg considered this one of his greatest achievements.

When Glen T. Seaborg finished his term as Chairman of the AEC, he went back to Berkeley where he was appointed to the position of University Professor.

Glen T. Seaborg wrote or co-wrote several books over his career, and published over 500 scientific articles. He also owned over 40 patents.

Glen T. Seaborg received many awards and honors, some of which included:

Glen Theodore Seaborg married Helen Griggs in 1942. She was secretary to a physicist. The couple had seven children.

Glen T. Seaborg maintained his Swedish heritage, visiting the country often. He was elected as a foreign member of the Royal Swedish Academy of Sciences in 1972.