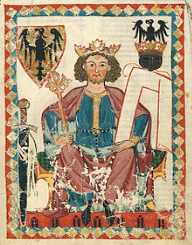 Henry was born in November 1165, in Nimwegen, in the Netherlands. He was born into the House of Hohenstaufen. His father was Emperor Frederick I, and his mother was Beatrice I, Countess of Burgundy.

Henry was just four years old when he became King of the Romans.

Godfrey of Viterbo educated him. Henry's knowledge was legendary, particularly in Roman law and canon.


Son of an Emperor

In 1174, Henry accompanied his father on a campaign to Italy. They returned to Germany in 1178 and fought together to quell an upsurge.

Frederick I made arrangements with King William II of Sicily, for Henry to marry Constance, the king's daughter. They married in January 1186, and Henry added the title King of Italy to his growing list of names.

When his father died in 1190, Henry succeeded him to become the Holy Roman Emperor.

Over the ensuing months, Henry negotiated with other nobles to establish his power. Leopold V of Austria captured the King of England, Richard the Lionheart, and gave him to Henry.

Having the English King as a prisoner gave Henry bargaining power. He continued to negotiate for more favorable terms, and he became allies with King Richard.

In 1194, Tancred of Lecce died. His death gave Henry the opportunity to take the crown of Sicily as well. The heir apparent, William III, was just a young boy. William fled with his mother, and he renounced the Sicilian throne.

Henry took the crown on 25th December. He caught William and killed many of his attendants.

Henry became the most influential king in Europe and the Mediterranean. He had more power and money than any other person.

He tried to integrate Sicily into his kingdom, but he was unable to reach an agreement with the Pope.

Through 1195, Henry continued to conquer, but also faced battles.

He returned to Germany in 1195 to garner support for another crusade. Henry also had negotiations with the princes to make his title hereditary. Although he didn't succeed in getting their help, his son, Frederick II, became King of the Romans.

Henry traveled to Sicily in 1197. The people of Italy rose against him in revolt to his harsh rule. He couldn't stand against the rebels, and he entered a treaty.

While hunting, Henry fell ill. He had the chills, and then on 28th September 1197, he died. Cause of death was malaria.