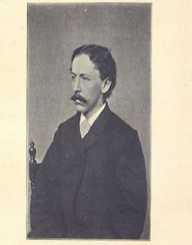 Thomas Bailey Aldrich was an American poet, novelist, and editor. He was most famous for his nine-year-long stint as the editor of the renowned American publication ‘The Atlantic Monthly’, his independent views and his regular confrontation with the publisher Henry Houghton regarding his refusal to publish commissioned articles of the publisher’s friends and companions. His semi-autobiographical novel, ‘The Story of a Bad Boy’, in which the juvenile character of ‘Tom Bailey’ is shown as the hero, also brought him into the limelight.

Thomas Bailey Aldrich was born on November 11, 1836, in Portsmouth, New Hampshire, USA. His parents Elias Taft Aldrich and Sarah Abba Bailey Aldrich had their roots in the colonial families of New England.

During the initial ten years of his life, Thomas Bailey Aldrich moved from place to place along with his family. First, he was relocated to New York at the age of five and then to New Orleans at the age of ten. Aldrich was sent back to Portsmouth after ten years to prepare for his college. He was enrolled at Samuel De Merritt’s school in Portsmouth. It was a preparation for ensuring admission to Harvard University. But his father’s sudden death in 1849 changed everything.

Thomas Bailey Aldrich abandoned his college preparations and started working as a clerk in a merchant office in New York. In 1852, at the age of 16, he joined his Uncle’s office in New York and started contributing to the newspapers and periodicals. At this stage, he developed a friendship with many contemporary other young poets and artists famously known as the Wits of the Metropolitan Bohemia of the early 1860s.

During his stint in his Uncle’s office, Thomas Bailey Aldrich started writing for different newspapers, magazines, and periodicals. In 1855, his first book of verses ‘The Bells’ was published and it instantly created his identity and made him familiar among the literary circles of that time. At this time he was appointed as a literary critic in the ‘New York Evening Mirror’. In 1856, ‘Home Journal’ employed him as one of its staff members. He continued in that position for the next three years and was subsequently elevated to the position of ‘Sub Editor’.

During 1861 to 1865, Thomas Bailey Aldrich was the editor of the ‘New York Illustrated News’. American Civil War also took place during this period. He switched over as the editor of ‘Every Saturday’ after the conclusion of American civil war, where he continued for the next ten years till the closure of the publication.

‘Our Young Folks’ published Thomas Bailey Aldrich's magnum opus semi-autobiographical novel ‘The Story of a Bad Boy’ in 1870. He published another collection of stories ‘Marjorie Daw and Other People’ after three years. ‘Cloth of Gold’, ‘Flower and Thorn’, ‘Wyndham Towers’ and ‘Mercedes and Later Lyrics’ are some of his other widely acclaimed book of verses among many others.

The most authoritative and eventful journey of his career as a journalist started in 1881. One of the most reputed publications of America ‘The Atlantic Monthly’ appointed Aldrich as the Editor. During his nine-year-long tenure as the editor of the journal, Thomas Bailey Aldrich had several confrontations with the publisher. His refusal to publish articles written by many powerful personalities and his independent and uncompromising views about the contents to be published in the publication was the bone of contention. After the conclusion of his nine-year stint with ‘The Atlantic Monthly’, he spent the rest of his life traveling with his family as well as writing independently.

On November 28, 1865, Thomas Bailey Aldrich married Lillian Woodman. They had two sons. In 1901, Aldrich’s son Charles was diagnosed with tuberculosis. On March 6, 1904, Charles Aldrich died of tuberculosis. He was 34 years of age at the time of his death. Thomas Aldrich stopped writing altogether after the death of his son.

On March 19, 1907, Thomas Aldrich died at the age of 70 in Boston, Massachusetts due to unknown reasons. His widowed wife Lillian Woodman Aldrich published her memoirs in 1920 in the name of ‘Crowding Memories’. Aldrich’s last work; a poem titled ‘Longfellow’ which was completed just a few days before his death was read at his funeral.