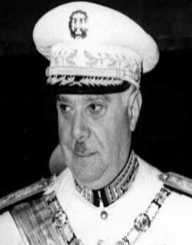 Rafael Leónidas Trujillo Molina was a soldier, politician, and a dictator of the Dominican Republic. Born on October 24, 1891, his authoritarian rule of the country lasted three decades, from February 1930 to his assassination in 1961. His government is considered as one of the cruel and bloodiest ever in modern history. Trujillo came to power during a revolt against President Horacio Vásquez in 1930 and maintained power until his death.

Rafael Trujillo first served as President from 1930 to 1938, then from 1942 to 51, and continued his rule as a military man under figurehead presidents. He supervised the killing of opponents and was responsible for the death of between 1,000 and 30,000 in the Parsley massacre. His rule, however, brought stability and prosperity to the country but with a price of the people losing their civil liberties and human rights violations.

Rafael Leónidas Trujillo Molina was born on October 24, 1891, in San Cristobal, Dominican Republic. He was born to José "Pepito" Trujillo Valdez and Altagracia Julia Molina Chevalier as the third of eleven children. His stepbrother was Luis Rafael "Nene" Trujillo. He started his education in the school of Juan Hilario Meriño at age six. He transferred to the school of Broughton a year later and became a pupil of Eugenio Maria de Hostos.

He worked as a telegraph operator from age 16 until around 19 years when he became involved with crimes. Trujillo was involved in check counterfeiting, cattle stealing and other robberies. The crime led to his arrest and imprisonment, but the hardened criminal, Trujillo, did not stop his crime afterwards. He formed a notorious gang called the 42 to terrorise people.

In 1918, Rafael Trujillo joined the National Guard, where he trained with the US Marines. The United States had occupied the Dominican Republic in 1916 after threats of defaulting foreign loans. They later formed an army to establish power. Trujillo was very impressive and rose in ranks very quickly. He moved from cadet to general and later became the commander-in-chief of the Army within nine years.

In February 1930, a coup d’etat was staged against then-President Horacio Vasquez in Santiago. With his quest for power, Rafael Trujillo entered a deal with the rebel leader Rafael Estrella Urena, which would allow Estrella to take power and in return Trujillo being allowed to run for the presidency. Estrella took power as acting president on March 3 and Trujillo became the head of police and the army. He later contested as a presidential nominee of the Patriotic Coalition of Citizens with Estrella as a running mate. Amidst intimidation from the army, other candidates pulled out of the race, and Trujillo won by 99 percent during the election.

Rafael Trujillo government was that of nepotism with family and associates given high positions. His first term of office was from 1930 to 1938 and served again from 1942 to 1952 when he ceded power to his brother Hector Trujillo. Until his assassination, he subdued his citizens with authoritarianism characterised by atrocities and brutalities. His opponent became the primary target of which many were assassinated. Trujillo’s government-supervised over crime and amassed worth for himself, family, and associates.

Soon after taking office in 1930, Santo Domingo was hit by Hurricane San Zenon, causing the death of about 2000 people. In response, Rafael Trujillo placed the country under martial law. After the rebuilding of the Santa Domingo, he renamed it Ciudad Trujillo in his honour. Several other monuments were built in his honour.

Aside from assassinating opponents in his country, Rafael Trujillo pursued his perceived enemies in other countries including the murder of Jesus de Galindez and the Mirabal sisters. Thousands of Haitian migrants were murdered in the Parsley Massacre in 1937. He had several nicknames including as "El Jefe" ("The Chief") or "El Benefactor" ("The Benefactor").

Rafael Trujillo married three times and had several other mistresses. His first marriage was to Aminta Ledesma Lachapelle on August 13, 1913. On March 30, 1927, he married Bienvenida Ricardo Martínez, with whom he had a daughter Odette Trujillo Richardo. They divorced in 1935. He then married María de Los Angeles Martínez Alba. They had three children, Rafael Leónidas Ramfis, Ángeles del Sagrado Corazón de Jesús, and Ramfis and Rhadamés. He also had two children Yolanda and Rafael with a mistress Lina Lovatón Pittaluga.

On May 30, 1961, some disgruntled military personnel and other people ambushed Rafael Trujillo's blue 1957 Chevrolet Bel Air on the road outside the Dominican capital. He was shot to death in the ambush. Among those who plotted the ambush included General Juan Tomás Díaz, General Antonio Imbert Barrera, Antonio de la Maza, Pedro Livio Cedeño and Amado Garcia Guerrero. Despite succeeding in their attempt, they were not able to take control of the country, as there was no contingency plan and were also betrayed by a co-conspirator General José ("Pupo") Román.

The plotters were later fished out by the SIM and most of them assassinated. The last six of them was murdered on November 18 in the “Hacienda Maria Massacre.” General Imbert alongside another conspirator Luis Amiama Tio managed to escape. Trujillo was initially interred in his hometown. He was later moved to Paris, to be buried in the Cimetière du Père Lachaise on 14 August 1964. In 1970, the remains were transferred to Spain to be buried at El Pardo cemetery near Madrid.