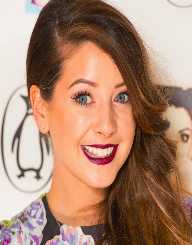 Zoella was born in March 28th, 1990 in Lacock, England. She is a young blogger famously known for internet fashion and beauty. She, in essence, is her blog name which she came up with, in 2009.

Zoella was born in March 28th, 1990 in Lacock, Wiltshire, England as Zoe Elizabeth Sugg. She spent her childhood years in Wiltshire where she lived with her parents and younger brother Joe Sugg. She went to Corsham Secondary School as a teen and later joined the Arts College. She moved to Brighton after her studies where her career thrived.

While in Brighton, Zoella began working at an interior design company and later purposed to venture into blogging. She came up with her blog known as Zoella in February 2009 which attracted a high number of fans. The blog addressed matters of fashion, lifestyle, and beauty which drew more than 500 million reviews in six years. Sugg’s success was even more apparent when she upgraded her blog into a YouTube channel just a few months after its inception.

By 2015, her level of fame seemed invincible as her YouTube channel Zoella 280390 had gained a sign up of up to 9.9 million with a review adding up to over 600 million. She had become a celebrity of many trades seeing her working with Penguin Books on a contract basis that began in 2014. She wrote and published her first book “Girl Online” which in effect was her most remarkable work especially among the youth. The book became popular attaining a sales record of about 78,109 copies by the end of December 2014.

Sugg released another literary work on 20th October 2015 known as “Girl Online: On Tour” and “Girl Online: Going Solo” in July 2016. Apart from online blogging and writing, Sugg had also ventured into beauty products seeing her start a beauty products brand known as ‘Zoella Beauty” in 2014. She introduced two more brands of beauty products known as ‘Tutti Fruity’ and ‘Sweet Inspirations’ in 2015 and 2016 respectively.

Sugg is among the best bloggers and Vloggers in the UK with a number of awards in her name including ‘Cosmopolitan Blog Award: Best Established Beauty Blog’ (2011), ‘Cosmopolitan Blog Award: Best Beauty Vlogger’ (2012), ‘Nickelodeon Kids’ Choice Award: Uk Favorite Vlogger’ (2014), ‘Teen Choice Award: Choice Webstar, Fashion/Beauty’ (2014), ‘Teen Choice Award: Choice Webstar, Fashion/ Beauty’ (2015). She was also nominated for the ‘Shortly Award under the category of the You Tuber of the Year in 2016

Sugg currently lives in Brighton with her spouse Alfie Deyes whom she met in 2014. Her parents are Graham Sugg (Father) and Tracey Sugg (Mother), and she has a brother called Joe Sugg who is also a vlogger.