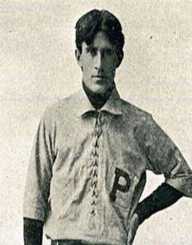 Pearl Zane Grey was born 31st January 1872, to Lewis and Alice Gray. He was born in Zanesville, Ohio, in the United States. Grey came from a Quaker background, and he had four siblings. His father was a dentist, who used to beat Grey on a regular basis.

The family name was changed from “Gray” to “Grey” soon after he was born, and Grey dropped his first name sometime thereafter and kept his middle name “Zane” as his first name.

Zane Grey loved fishing, baseball, and writing as he grew up, and although his behavior was antisocial, which was attributed to the treatment from his father, he befriended an old man named Muddy Miser who encouraged his interests.

His father told him to stay away from Miser, but Grey ignored him and spent a lot of his time with Miser growing up.

Grey loved reading, and he wrote his first novel at the age of 15. His father tore it up and gave him a beating for good measure.

The family moved to Columbus, Ohio in 1889. Grey’s father had financial problems which was why they moved, and he tried to start a new dental practice in their new city.

Grey had also become a dentist and worked by making house calls for a time.

Grey was playing baseball with the hope of joining the major league, and he was spotted by a scout while he was playing, and several colleges vied for him to join their school.

His brother, Romer, also attracted similar attention and on to have a professional baseball career.

Grey studied at the University of Pennsylvania having been awarded a baseball scholarship. He studied dentistry and graduated in 1896.

He played in the minor leagues for several years but never made it as a professional baseballer.

In 1896, Zane Grey established his dental practice in New York City. He had no joy as a dentist, but he chose it from a “sensible” point of view to have an income.

While he practiced his dentistry during the day, Zane Grey began writing of a night time. He wasn’t a very fluent writer when he began, but he persevered.

Zane Grey met Lina “Dolly” Roth in 1900, and the couple married in 1905. She was studying to become a school teacher.

Through their courtship and right through their marriage, Grey continually saw other women.

Dolly was aware of the situation, but she chose to ignore it. After they married, Dolly gave up her teaching ambitions.

Zane Grey decided to give up his dentistry and concentrate on his writing. He was able to do it because Dolly had an inheritance that covered their expenses, and which allowed him the freedom so there was no pressure to earn an income.

Grey was seldom home. He spent months at a time away from his family, during which time he fished, wrote, and saw other women.

Dolly had great business acumen and she managed his contracts with agents, publishers, and movie studios. She also worked as his editor.

His first couple of attempts at writing proved fruitless, with the publishers rejecting his work. In 1910, he finally had success.

His novel, The Heritage of the Desert, became an instant best-seller. His next work was accepted by the publisher he took it to, and he was on his way.

Zane Grey s most famous work, Riders of the Purple Sage, was released in 1912.

In 1918, the family moved to California. He bought a mansion in one of the best areas of town. From 1918 to 1932, he regularly contributed to Outdoor Life magazine.

Although he continued to write, the Great Depression had a huge impact, and the publishing industry was affected as much as any other industry, so sales dropped off. He did, though, earn royalty income and many of the film adaptations made from his novels were done during the 1930s.

Grey’s prolific writing made him one of the first authors to become a millionaire. Many of his books were reprinted in the 1940s as paperbacks, and sales were phenomenal.

Grey established his own motion picture company after his first two books had been turned into movies. He sold his company to Jesse Lasky after he had produced seven movies. Lasky was a partner of the founder of Paramount Pictures.

As well as his writing, Grey continued his keen interest in fishing for his entire life.

He co-founded the Porpoise Club in 1912, which was to promote the hunting of dolphins and porpoises for sport.

He was also one of the establishers of the Long Key Fishing Club in Long Key, Florida, and served as its president from 1917 to 1920.

In the 1920s, he was a frequent visitor to Australia and New Zealand to promote fishing, and he also set several world records.