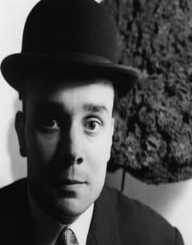 French artist Yves Klein was born in Nice, France on the 28 April 1928 to Marie Raymond and Fred Klein. The family divided their time between Nice and Paris. His aunt had a bookshop in Nice where Klein used to work when he was young.

During his student years, Yves Klein trained and practised judo. He also began painting. Around this time, he met the singer Claude Pascal and the artist Arman, becoming friends with both of them. In 1947, he composed his first one-note Monotone Symphony. The following year he began travelling, spending time in the United Kingdom, Spain, Italy and Japan (1948-1952).

He also experimented with Anthropometries, covering nude models in the paint and getting them to drag themselves on the floor. In 1960, he was a signatory on the manifesto of the New Realists (1960-1963). The same year, he applied for a patent for International Klein Blue (IKB) a paint colour he had created. During 1961, he had his first solo exhibition in the United States, which was held at the Leo Castelli Gallery in New York City. He also had an exhibition at the Museum Haus Lange, Krefeld in what was then West Germany.

Yves Klein worked with Claude Parent to design Fountains of Warsaw for the Palais de Chaillot in Paris. He also did a series of large life-size busts of Claude Pascal and Arman in Klein Blue (1962). Klein starred in Mono cane (1962) what was later called a shockumentary, a collection of archival material showing human beings at their most bizarre and depraved.

Posthumous retrospectives were held at Schirn Kunsthalle, Frankfurt, Germany (2004-2005) as well as Yves Klein: With the Void, Full Powers (2010-2011) which was held at the Hirshhorn Museum and Sculpture Garden at the Smithsonian Institute in Washington, D.C. and the Walker Art Center in Minneapolis.

Yves Klein married Rotraut Uecker on the 21 January 1963. She was seven months pregnant with the couple son when Yves Klein died on the 6 June 1962.