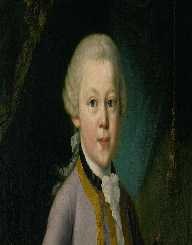 Wolfgang Amadeus Mozart was born on the 27 January 1756 in Salzburg, Austria. His parents were Leopold Mozart and Anna Maria Pertl. Leopold was a teacher, a composer and as a court musician for the Archbishop of Salzburg. The couple had seven children, but only two survived infancy. Wolfgang Mozart and his sister Anne.

At an early age, Wolfgang Amadeus Mozart showed an interest in music. His father was his musical teacher, and by the age of four, Mozart was showing signs of unusual talent. Wolfgang’s father instructed the boy, and the time he was six years old, he understood and rules of musical composition and could play the keyboard.

In 1762, organized performances for his children in Vienna, Prague, and Munich, including a performance at the Court of the Elector in Munich. There was a series of public concerts which helped with the family finances.

Leopold obtained leave from his job as deputy Kapellmeister at the court of Prince-Archbishop of Salzburg and toured Europe, promoting the talents of his two children unusually gifted children. During the extended European tour, The family traveled to Brussels, Paris, London, Munich, and Frankfurt. They spent fifteen months in London. It was in London that Wolfgang Amadeus Mozart composed some of his first symphonies. While in London, Wolfgang Amadeus Mozart met some established and influential musicians, including J.C. Bach (1734-1782).

They arrived home in Salzburg in 1766

The family needed to be paid commissions and so leaving his mother and sister at home; Leopold began a series of Italian tours with Mozart. The Italians responded very positively towards Mozart, recognizing his genius and seeing his potential.

There were trips between December 1769 and March 1771; August-December (1771) and October-March (1773). During this time Wolfgang Amadeus Mozart met G.B. Martini. He was awarded membership of the Honorary Knightly Order and also made a member of the Accademia Filarmonica. As Mozart was 17 and the entry age for membership was 20, a special dispensation was made. A famous incident occurred in Rome. Wolfgang Amadeus Mozart listened to Gregorio Allegri's Miserere in the Sistine Chapel and was able to write it down from memory. The Vatican closely guarded all material, and this was the first illicit copy of Miserere.

Wolfgang Amadeus Mozart wrote the opera Mitridate Re di Ponto in 1770. During their Italian tour, they returned to Salzburg for the premieres of Alba (1771) and Lucio Silla (1772) As the Italian tours came to an end, Mozart produced one of his masterpieces: Exsultate, jubilate( K. 165.)

For six years Wolfgang Amadeus Mozart worked as a court musician. During this time he built up a large network of symphonies, string quartets, and opera. In 1775, he produced his famous K. 216, K. 218, K. 219 violin concertos. And in 1777, showed his musical maturity with his E-Flat concerto K271. During this time Mozart made a trip to Vienna in 1773, and another to Munich in 1775.

Mozart’s mother accompanied him on the Paris trip Mozart’s correspondence with his father during this time is a valuable resource for historians. Paris was not a happy time. He battled to find commissions, was largely ignored and felt underappreciated. He gave music lessons and the commissions he did attract, were mainly ballet and chamber music. He was finding it hard to make ends meet financially. Then his mother died suddenly in July 1778. Wolfgang Amadeus Mozart was not keen to return to Salzburg and was looking for other opportunities. His father eventually arranged a position for him in Salzburg, and he returned in January 1779.

Mozart’s talent bloomed during from the age of twenty-five when he produced his six symphonies. He wrote no. 39 in E-flat Major, no. 40 in G Minor, and no. 41 in C Major over a six week period in 1788.

In 1782, Wolfgang Amadeus Mozart produced Abduction from the Seraglio, a German singspiel. His next opera were Le Nozze de Figaro (1786) followed by The Marriage of Figaro, Don Giovanni (1787)and The Magic Flute (1791)
He was unwell when composing Requiem and died before its completion.

When Wolfgang Amadeus Mozart died in 1791, he left behind 600 compositions. Some of his most popular works include Serenade No. 13, Eine Kleine Nacht-Musik; his most famous Symphony No. 40, 1st Movement Allegro; the overture to the opera The Marriage of Figaro and his Piano Sonata No. 11 in A Major.

The Marriage of Figaro is one of the top ten most performed operas ever written.

Possibly one of the most moving and famous opera overtures of all time. It is still played alone as a concert piece the world over. In fact, The Marriage of Figaro is considered to be one of the top ten most performed operas worldwide.

Wolfgang Amadeus Mozart had met Aloysia Weber and was besotted with her, but their relationship did not take hold. After Aloysia had married Joseph Lange, Mozart became interested Constanze Weber, Aloysia’s sister. After some family opposition, the couple finally married in August 1782. They had six children including Karl Thomas Mozart (1974-1858) and Franz Xaver Wolfgang Mozart (1784-1858). Neither brother married, and the Mozart line died out when Karl died on 30 October 1885.