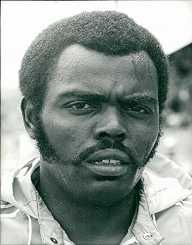 American sprint runner and US military officer Willie Davenport was William D Davenport born on the 8 June 1943 in Troy, Pike County, Alabama in the United States. He was the eldest of seven children. When he was nine years old, his family relocated to Warren in Ohio.

Willie Davenport graduated from Howland High School (1961) and later, after his discharge from the US Army, enrolled at Southern University and  A&M College in Baton Rouge in Louisiana. He graduated with a degree in Physical Education (1969).

At the high school, Willie Davenport excelled in all sports and baseball was his passion before he decided to concentrate on track events. At the high school, he set a state record in 120-yard hurdles. Once he had graduated in 1961, Davenport joined the U.S. Army as a paratrooper and was sent to Mainz in Germany (1961-1963). During his time in Germany,  he focused on his hurdling technique.

Willie Davenport was a private in the US Army in 1964 when he won the 110m hurdles at the US Olympic trials. At the Summer Olympic Games held in Tokyo in 1964, he experienced a thigh injury and lost in the semi-finals. Davenport was discharged from the Army in 1965 and enrolled at Southern University and the A&M College. He became the national champion in his event for three consecutive years (1965-1967) and at the Summer Olympics held in Mexico City in 1968, he won a gold medal in the 110m event, his time was 13.3, which equalled the Olympic record.

After joining the US Army National Guard, he rose to the rank of colonel. As Chief of the Office of Sports Management and coached the All-Army track teams to victory during 1993-1996.

In 1969, Willie Davenport married Marian Calvey, with whom he had three children: two boys, Willie and Mark and a girl, Tanya. Willie Davenport died of a heart attack on the 17 June 2002; he was 59 years of age.